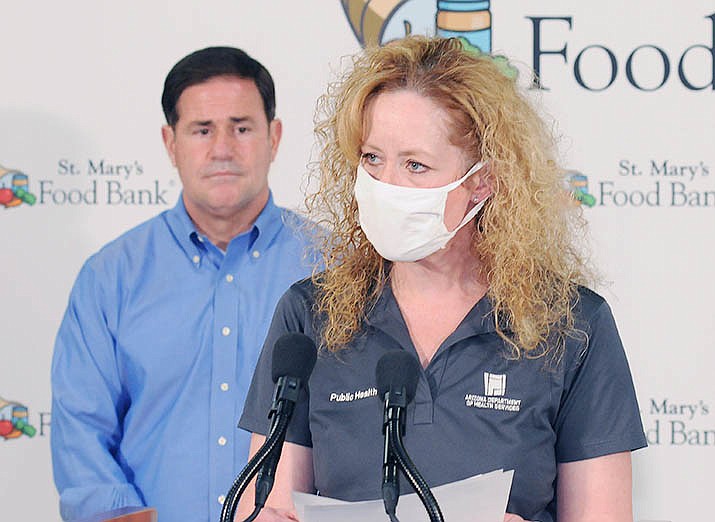 State Health Director Cara Christ said Friday that educators, public safety workers and those 75 and older in five Arizona counties should be able to get inoculated against COVID-19 at pharmacies in a little more than a week. But Christ said she sees no reason to impose additional restrictions on Arizonans even as available hospital beds drop to 7%, the number of deaths is poised to hit 10,000, and the state tops the world in current rates of new infections. (Capitol Media Services file photo by Howard Fischer)

PHOENIX -- The state's top health official said Friday that educators, public safety workers and those 75 and older in five Arizona counties should be able to get inoculated against COVID-19 at pharmacies in a little more than a week.

But Cara Christ said she sees no reason to impose additional restrictions on Arizonans even as available hospital beds drop to 7%, the number of deaths is poised to hit 10,000, and the state tops the world in current rates of new infections.

In a briefing Friday, Christ acknowledged a spike in infection following the Christmas holiday. And she conceded Arizona should look for another increase in the weeks following celebrations for New Year's Eve.

But Christ said she remains convinced all that has to do with people spreading COVID-19 through small group gatherings and acting in unsafe manners lik e not wearing masks. And she pointed out that the restrictions put in place last year, like occupancy limits on indoor restaurant dining, remain in place.

More to the point, Christ, who is a physician, said she's not convinced that stronger measures will make a difference.

"California has some of the strictest mitigation strategies,'' she said. "And they've even got less hospital capacity and higher numbers than Arizona.''

So instead, her agency is focused on getting more people vaccinated.

As of Friday, Christ said there were 126,090 doses administered. Most of those were first doses, though about 2,000 included people who got the required second dose.

She also said that by the middle of this coming week the state's two largest counties should be in the 1-B stage. That opens the door for inoculating for educators, child care workers, public safety workers, adults in nursing home and other congregate care facilities with high-risk medical conditions, and individuals who are 75 and older, regardless of medical condition.

Gila, Mohave and Pinal counties already are at that point.

But Christ conceded that just 45% of those individuals statewide in Phase 1-A have been vaccinated. These are the front-line health care workers.

Despite that, the health chief said she is not alarmed.

She said some of that may be due to people having to schedule appointments. And she said that even as the state moves into the 1-B category and beyond, those front-line workers remain eligible.

Christ conceded, though, that even among health care workers there may be some hesitation. The answer, she said, will come with time.

"We know that as more and more people get vaccinated and talk about their experience, people who may have not been comfortable getting vaccinated early on may opt to get vaccinated later,'' she said.

Christ also announced the state will be opening up a 24/7 inoculation site at State Farm Stadium in Glendale. She figures that could move about 6,000 people a day through the system.

But that will be available solely to those who fit within that 1-B category and the remaining 1-A eligible. And it requires an appointment that can be set up on the agency's website or calling the 2-1-1 referral line.

And the rest of the state?

"They are all working on strategies,'' Christ said.

Some of that is going to be through each county health departments. But she also said the U.S. Centers for Disease Control and Prevention already is working with directly with pharmacies where residents of will be able to get inoculated when each county goes into that 1-B phase.

Christ figures those pharmacies will be able to start offering vaccines beginning the week of Jan. 18. That, she said, will mean that "individuals can go get vaccinated, just like they do with the flu.''

And she said Pima County is looking at creating additional mass vaccination sites and extending the hours at some of those.

The best best, said Christ, is checking with the agency's web site at "azhealth.gov/findvaccine.'' where individuals can find out what stage their county is in, locations for vaccinations and links to preregister.

That still leaves the fact that it will be until late February or early March before Christ believes those in the 1-C category will be able to get in line. That includes anyone 65 and older, adults of any age with high-risk medical conditions and adults living in congregate care settings.

"And it's probably the spring before we'll be moving into the general population,'' she said.

In the meantime, most Arizonans will remain susceptible to contracting the virus. But Christ said she remains convinced that mandates like those imposed in other states, like masks, curfews and business closures, will make no difference here.

"As you're looking at what's going on in the other states, there's not a best practices model,'' she said.

Christ said the answer is getting people to follow the protocols that are in place, like not spending time with groups of people you don't know.

"We know that people got together, we know that they let their guard down on Christmas and Christmas Eve,'' Christ said. "We saw the results after that, with Arizona recording its highest peak in infections in the three to five days after the holiday.

And it's not over.

"The spike from New Year's will likely come this coming weekend,'' she said.

Christ said the best way to curb the spread is people wearing their masks. She said even though Gov. Doug Ducey, her boss, has refused to issue a statewide mandate that 91% of the state is covered by some sort of local mask ordinance.

"There's not local enforcement going on,'' Christ said, though she said that her agency is going out and checking establishments over which they have some power, like fitness centers.

While the health director has done weekly briefings, the governor who actually decides any restrictions, has not faced the media since Dec. 16. But Christ said that shouldn't be a surprise, as her briefings are focused on technical aspects of the virus and the vaccines, even though she is the one put in the position of answering those policy questions.

All this comes as the latest numbers show that just 131 of the state's 1,690 beds in intensive-care units are available, with a majority occupied by COVID-19 patients.

Johns Hopkins University also said Arizona has the highest rate of newly confirmed COVID-19 cases over the past seven days. And the 197 new deaths reported Friday brought the statewide total to 9,938.