Emergency powers one of several focus points of 2021 legislature 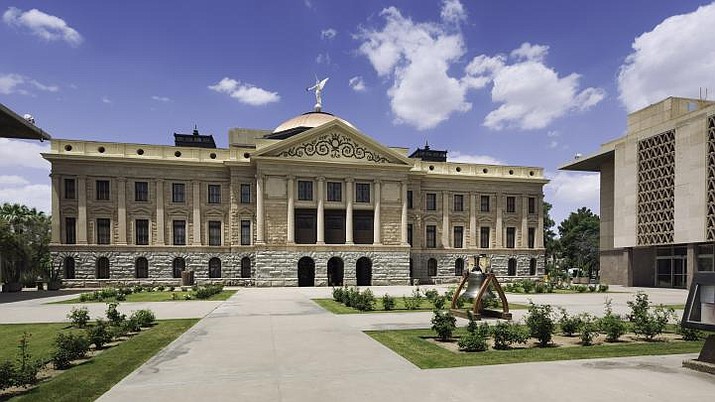 PHOENIX - The 2021 legislative session is being brought to you by the letter E.

As in emergency powers, election legislation and education funding.

And the session will get off to a quick start as one of the first act of lawmakers will be to determine whether it's time to finally pull the plug on the state of emergency that Gov. Doug Ducey declared 10 months ago, an action, if it gets a majority vote, the governor cannot veto.

The 2021 Arizona Legislature, by the numbers

This year -- 31 Republicans and 29 Democrats

This year -- 16 Republicans and 14 Democrats

Deadline for adjourning this year (Saturday the week of the 100th day, counting Saturdays and Sundays) -- April 24

*Last working day was actually March 23. Legislature recessed repeatedly after COVID-19 outbreak until coming back May 26 solely to adjourn.

Number of bills introduced last regular session (not including miscellaneous resolutions and memorials) -- 1,607

Her measure, SCR 1001, seeks to take advantage of a provision in the law that gave Ducey the power to unilaterally declare an emergency in the first place. It says the emergency ends when the governor says it does -- or when a majority of legislators vote to say it's over.

Only thing is, foes haven't been able to even debate the issue until now because they weren't in session. And it takes either a gubernatorial call, one Ducey was not going to provide, or a two-thirds vote to do that.

Now, with the session starting Monday, Udall needs just 16 senators and 31 representatives to put an end to the emergency.

But here's the thing: There's no clear law about whether the governor can simply turn around and declare a new one and reinstate all the provisions, like what businesses can be open and under what conditions.

That possibility has Rep. John Kavanagh, R-Fountain Hills, asking Attorney General Mark Brnovich whether that would require the legislature to have yet another vote to swat down the governor. And he wants to know whether that would automatically terminate any reinstated actions "or would a court have to issue an order?''

Then there's the question of whether lawmakers have other options. For example, Kavanagh wants to know whether the legislature could impose some sort of self-destruct measure into an existing emergency, like saying it has to end when hospital or infection levels drop below a certain level.

The governor, in an interview with Capitol Media Services, said pulling the plug on his declaration would be a bad idea.

"We're still in that public health emergency,'' he said. "That's why state law and the constitution provide for executive emergency authorities in situations like that.''

Even if a majority of legislators won't immediately quash the current emergency, there is broader support to reviewing the underlying laws that allowed him to declare it in the first place.

Rep. Mark Finchem, R-Oro Valley, wants a constitutional amendment sent to the ballot to require governors to get "advice and consent'' of the legislature within a certain period, perhaps 14 days, of declaring an emergency. He said the state's chief executive would need to provide lawmakers with "evidence that an emergency exists.''

Even those who may look for less drastic measures think the law needs to be revisited.

Senate President Karen Fann and House Speaker Rusty Bowers put together a special panel to review the statutes with the specific goal of determining if there s the proper balance between the needs of the governor to respond to unforeseen events and the role of the legislature in providing oversight. Fann said she's not sure that lawmakers, in adopting the laws, had in mind what Ducey has done.

"Nobody foresaw that it would be something like this that could potentially go on for months,'' Fann said.

"I'm open to ways we can improve our laws or policies in light of the knowledge that we have, having gone through our first pandemic in the history of the state,'' he said.

The National Conference of State Legislatures says that in six states the expanded power of the governor in an emergency has a built-in expiration date of between two and 60 days, depending on the state and the type of emergency.

Arizona already has statutes designed to prevent fraud and determine the accuracy of vote counts.

For example, unlike some states, early ballots are mailed only to those who request them, whether on an election-by-election basis or signing up for the permanent early voter list. And the law requires a hand count of the votes from 2% of precincts or vote centers, comparing what the machines tallied with what humans have determined are the votes.

"I do think we do elections well,'' Ducey said.

Still, there are suggestions for change.

Sen. J.D. Mesnard, R-Chandler, wants that hand count increased to 5% along with provisions allowing the attorney general, the secretary of state or the legislative council to demand more.

Potentially more sweeping, he also wants to allow anyone with enough money to cover the costs to demand a full recount of any election. Now, the only way that happens is if the margin of victory falls within certain margins, like 200 votes for a statewide race.

There is some discussion about tightening up that permanent early voter list, requiring names be purged if people don't vote in two election cycles and don't respond to a postcard.

And then there are measures that stem from issues from the 2020 election.

Take "Sharpiegate.'' That's the claim that felt-tipped pens used in some counties at polling places bled through to the other side of the two-sided ballots, affecting votes and resulting in some ballots not being counted.

Sen. Kelly Townsend, R-Mesa, wants to bar county officials from mandating the use of any specific marker.

Maricopa County officials said Sharpies are the marker recommended by the manufacturer of the tallying machines because the ink dries quickly while other pens leave smears in the counting machines which require them to be taken offline and cleaned. And, they said, races on the back of the ballot are offset so that a stray bleed-through on one side could not affect choices on the back.

But Townsend conceded to Capitol Media Services she has an ulterior motive.

"In order to comply with the legislation, they will have to terminate their lease with Dominion (Voting Systems) and go with a different company,'' she said, saying those other firms don't allow use of Sharpies. Dominion has been the target of various conspiracy theories, all unproved in multiple lawsuits, that its hardware and software were programmed to add votes for Democrat Joe Biden and not count those for President Donald Trump.

"I am concerned with the amount of distrust and the erosion of trust that's happening in elections across the country,'' Ducey said when asked about state election laws. And the governor said he's open to ideas to make elections here more secure.

But Ducey said he believes some of the issues around confidence here in the election returns -- the ones he certified as accurate -- are a matter of public education.

"We need to do a good job of communicating how we do things in Arizona that differentiates us from places like Pennsylvania, Nevada or Michigan,'' he said.

The issue of education funding goes to what Sen. Paul Boyer, R-Phoenix, believes is a broken promise.

When the pandemic hit, schools went to online learning. But the state funding formula provides fewer dollars for each child who is not sitting in a classroom.

On top of that, some students didn't come back, leaving districts with fixed costs but less state aid which is based on the number of students.

Ducey announced in June he was setting aside $370 million to guarantee that schools this academic year would have at least 98% of the funding they were getting last year. But that money ran out, leaving many districts with less.

"I really think we need to make sure we deliver on our promises,'' said Boyer who chairs the Senate Education Committee.

But the governor said not to look for him to supplement that $370-million appropriation. That, he said, was the commitment.

"That's been sent to schools,'' Ducey said. "Unfortunately, districts saw much higher declines in enrollment than they originally anticipated.''

Anyway, the governor said, there are other dollars that have been sent to schools.

Boyer acknowledged there is additional federal funding for education. But he said that is earmarked for Title I schools, those where a large percentage of children come from low-income families.

"It doesn't help the non-Title I schools,'' he said.

Boyer said he is still trying to figure out how much more schools need, either because of the lower reimbursement for online learning or declining enrollment.

Each district is different. Boyer said the Glendale Elementary School District where he lives lost about $8 million.

"That's a huge number,'' he said. But Boyer said that, whatever the amount is owed to schools statewide, it's not fair to provide less than promised.

"The principle for me is holding schools harmless,'' he said.