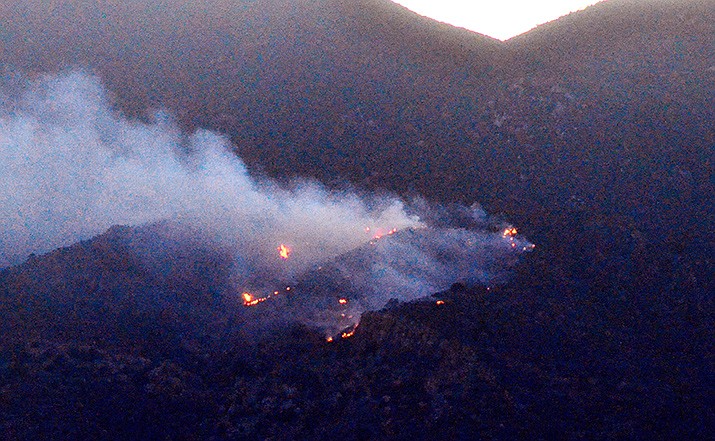 The Goat Fire was spotted Saturday afternoon, at a location close to the end of Forest Road 360. It’s about five miles from State Route 260, not far from Cherry Creek, and about three miles north of the community of Cherry. Firefighters returned Sunday morning to contain it, mapped it at about 28 acres by sunset. VVN/Vyto Starinskas

CAMP VERDE— Prescott National Forest firefighters have responded to the Goat Fire, located at the end of Forest Road 360, about five miles from State Route 260.

For their safety and due to limited access, firefighters investigated the fire late Saturday, but returned Sunday morning during daylight hours.

“With the help of neighboring firefighters and helicopter, the fire is 50% contained, with no growth Sunday,” Maneely said. “Firefighters will return Monday and continue to secure perimeter and increase containment.”

The Goat Fire might be visible in Cottonwood, Jerome and along State Route 260 but cooler evening temperatures were expected to greatly reduce fire activity. Wind was extremely light this weekend in the Verde Valley.

Maneely said firefighters have to hike in to the location, which is in a rugged and steep area. No evacuations have been ordered.

The fire is human-caused, Maneely said, but is still under investigation.