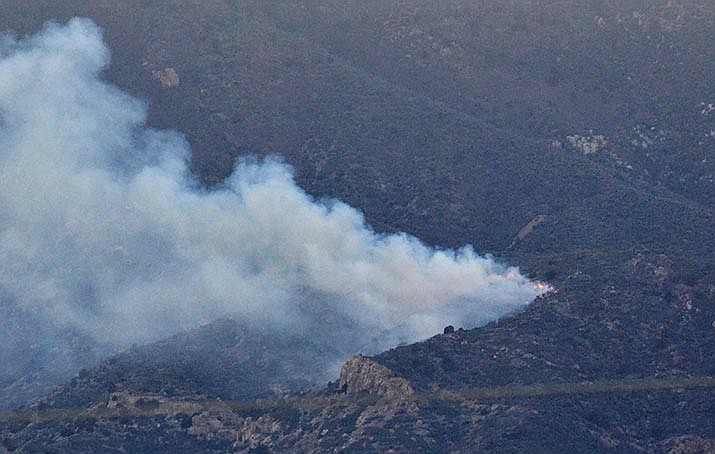 The Goat Fire was spotted Saturday afternoon, at a location close to the end of Forest Road 360. It’s about five miles from State Route 260 and about three miles north of the community of Cherry. Firefighters had the 28-acre 100% contained by Monday afternoon. VVN/Vyto Starinskas

Debbie Maneely, who handles public affairs for Prescott National Forest, said the Goat Fire, which was first reported on Saturday, was 100% contained as of 5 p.m. Monday.

The fire burned about 28 acres in steep, rugged terrain, about five miles west of State Route 260 and three miles north of the community of Cherry, near the end of Forest Road 360.

Maneely said the fire was human-caused, but remains under investigation. She didn’t specify what type of human activity likely caused the fire.

“The Goat Fire is a reminder that wildfires can happen any time of year,” Maneely said. “We would like to remind the public that abandoned campfires are still the leading cause of human-caused wildfires.”

Maneely said there are several things people can do to prevent wildfires from starting:

-Forest visitors are urged to follow campfire safety procedures. It is every camper’s responsibility to properly maintain and extinguish a campfire to prevent wildfires.

-Don’t let target shooting end with a wildfire. Place your targets on dirt or gravel. Shoot in areas free of dry vegetation and avoid windy days.

-If you are trimming brush and weed in your yard, make sure all portable gasoline-powered equipment is equipped with a spark arrester. This includes tractors, chainsaws, weedeaters and mowers.