Next COVID-19 vaccine tier to begin this week
County plans to ‘sub-prioritize’ tier 1b to vaccinate educators, first responders first 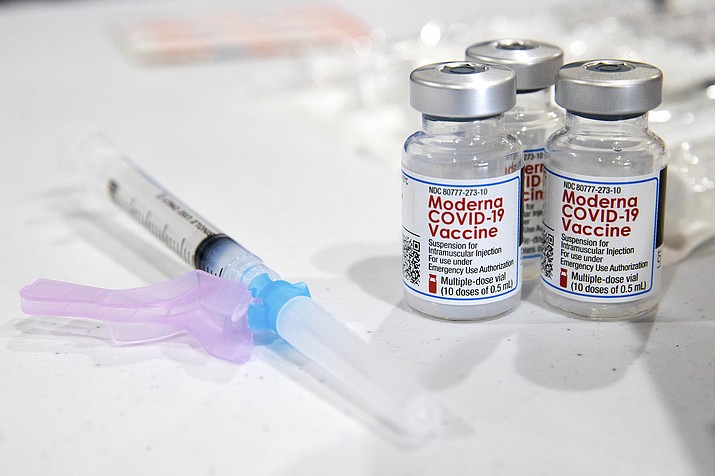 Vials of the Moderna COVID-19 vaccine — the type being administered in Yavapai County — sits ready for use. AP file photo

Every day for the past two weeks or so, the Yavapai County Community Health Services Department has been fielding about 1,000 calls, most with a common question: “When can I get the COVID-19 vaccine?”

Leslie Horton, director of the department, said the answer depends on many factors, ranging from age to profession to vaccine availability.

A news release that Horton released on Friday stated: “Please keep in mind that flexibility will be key as we roll out the schedule, as we may have times of very limited vaccine, however, we hope to have enough to suit the needs of the educators, childcare, and first responders as we trigger the start of phase 1b next week.”

PHASE 1A WRAPPING UP

Currently, Horton said vaccines are still being distributed to the first-priority tier, which includes workers in healthcare and emergency medical services, as well as residents of long-term care facilities.

Yavapai County initially received 8,000 doses, Horton said. The doses were distributed to local hospitals, which have been doing the vaccinations in groups of invited eligible recipients.

“We are wrapping up the vaccines for the 1a group,” Horton said Thursday of the top tier of vaccine recipients. “About 75% of that has been used.”

She added, “For every dose we’ve given so far, another dose is on standby (for the necessary second dose).”

PHASE 1B SET TO BEGIN

With the near completion of tier 1a, Horton said the vaccines for the second tier, 1b, should begin by this coming week (Jan. 11-15).

But she cautioned that group is immense in Yavapai County, and the 1b process likely would take months to complete. “There are tens of thousands of people (in the 1b tier),” Horton said. "The Centers for Disease Control and Prevention (CDC) website states that tier 1b includes “frontline essential workers,” such as firefighters, police officers, corrections officers, food and agricultural workers, grocery store workers, public transit workers, teachers and support staff, and daycare workers.

In addition, the 1b tier includes people 75 and older.

Horton’s news release stressed, “Even within that phase (1b), we are having to sub-prioritize education and childcare workers, and first responders.”

After the 8,000 initial doses, Horton said, Yavapai County has been allocated 3,900 doses per week for the entire county. “In Yavapai County, we do not yet have adequate supply of vaccine yet to begin vaccinations of the 75-plus or essential worker, and other populations in that same phase,” the news release stated.

Basically, she said the county would be phasing into 1b next week, but not opening up vaccinations for all of the populations in 1b until there is adequate supply to do so.

Horton added: “We are hoping to have the help of pharmacies and other healthcare partners ready to vaccinate more of those 1b populations as soon as the week of Jan. 19.”

Horton said the health department is well aware that many people are concerned about the vaccine and when they can get it.

“We are fielding about 1,000 calls a day,” she said, adding that many of the callers are in the 75-plus age group.

Another of the questions that callers are asking is whether people who have had the virus should receive the vaccine. She said the health department is responding that since people tend to have antibodies and do not re-infect for at least 90 days, “they might choose to wait.”

Regardless, people who have had COVID must be symptom-free for at least a week before getting the vaccine.

Meanwhile, Horton said the health department is hopeful that its allocations for vaccine doses will go up from the current 3,900 per week. “We don’t know from week to week how much we’ll get,” she said. “Nationwide, there’s a bit of a shortage.”

After phase 1b, which will take several months to complete, Horton said the next tier 1c “is rather large too.”

The CDC website lists the 1c group as including people from age 65 to 74; people from age 16 to 64 with underlying medical conditions; and other essential workers, such as transportation and logistics, food service, housing construction and finance, information technology, communications, energy, law, media, public safety, and public health.

Vaccinations for that tier will begin after 1b is completed — likely within three or four months, Horton said.

For members of the general public who do not fit into any of the 1a, 1b, and 1c categories, Horton said the vaccines likely would be available by “late spring or summer.”

In the meantime, she said, “We ask that people be patient. There is definitely a process, but this is the first time we are working through the process. So far, it’s going very well.”