Movie review: ‘Pieces of a Woman’ about tragic loss, survival 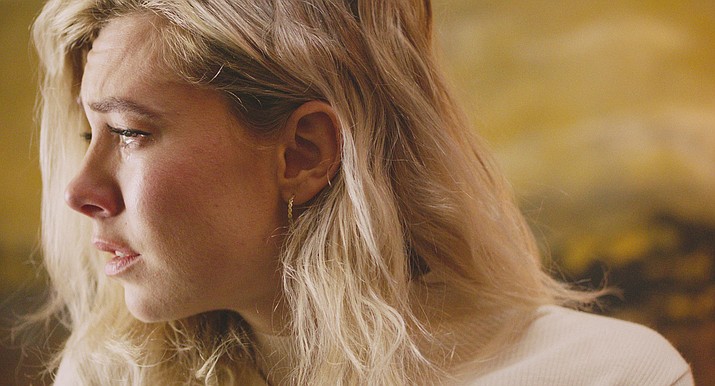 Vanessa Kirby in a scene from “Pieces of a Woman.” (Benjamin Loeb/Netflix via AP)

The movie “Pieces of a Woman” begins with a tragedy. Martha (Vanessa Kirby) is expecting her first child with her partner Sean (Shia LaBeouf). For a few minutes, we see them in the final stages of preparation for life with a baby: She’s saying farewell to her co-workers and packing up her things; Her mother is signing the papers on a practical minivan; And they’re hanging the final photos up in the well-stocked and tastefully neutral nursery.

Then, suddenly, Martha is in labor and for almost 30 minutes the audience is given a front row seat to the most realistic and graphic depiction of a home birth ever put on film. It’s a difficult labor — Martha is almost drunk with pain — and it’s made even more stressful by the fact that their midwife is unavailable and a replacement is sent. Then it ends in death.

It is a brutal and harrowing start to a film that is committed to telling the ugly truth about a loss so devastating that it’s almost taboo. And it’s just one of many deeply unpleasant occurrences to come. Like Martha and Sean, you are left somewhat paralyzed and drained after the events of the beginning and have no choice but to continue this emotionally wrenching and hauntingly visceral journey with them.

Martha attempts to go about her life but is constantly being reminded of what happened, whether it’s seeing children out in the wild, running into her mother’s friend at the grocery store or all the physical postpartum changes that one’s body endures regardless of whether or not the child has survived. She’s also navigating her own family’s grief, arguments over burials and epitaphs and a legal battle against the substitute midwife (Molly Parker), which is thankfully relegated to the backdrop.

Kirby, the English actor who portrayed Princess Margaret in the first seasons of “The Crown,” plays Martha not as a wilting flower but as a kind of steely, determined robot alternating between utterly detached and aggressively angry. It is fiercely unguarded.

If the gutting discomfort feels more authentic than you’re used to, it’s because the story is personal for the writer and director couple. Kata Wéber wrote the script based on her own experience losing a child with director Kornél Mundruczó during pregnancy. And “Pieces of a Woman” goes places that many films wouldn’t dare.

The first half hour will likely get most of the attention but there are a few other jaw-dropping scenes of grief and anger that you must see to believe including a late film argument between Martha and her mother, who is played by Ellen Burstyn.

Aside from the revelatory moments, however, the film unravels a bit as it goes on. The focus turns too often to Sean, a construction worker whose relationship with Martha, an educated professional from a wealthy family, never makes a lot of sense. His descent is a bundle of clichés and distracts from the uniqueness of Martha’s story. He also has a moment of sexual aggression with Martha that is even made even more troublesome to watch in light of the recent allegations against LaBeouf.

But it doesn’t detract from Kirby’s achievement here. Hers is an unforgettably vulnerable performance that deserves attention and consideration this awards season.

The same also goes for Burstyn in a difficult supporting role that she commands.

This movie will not be for everyone, but it is important not least because it continues to advance the discourse around miscarriages which is a trauma that couples, but mainly women, have been expected to shoulder in secret for far too long.

The ending won’t be satisfying either, but that’s probably the point. There is often no satisfying end to tragic loss, just survival.

“Pieces of a Woman,” a Netflix release available in the U.S. on Thursday, is rated R by the Motion Picture Association of America for “sexual content, brief drug use, language and graphic nudity.”