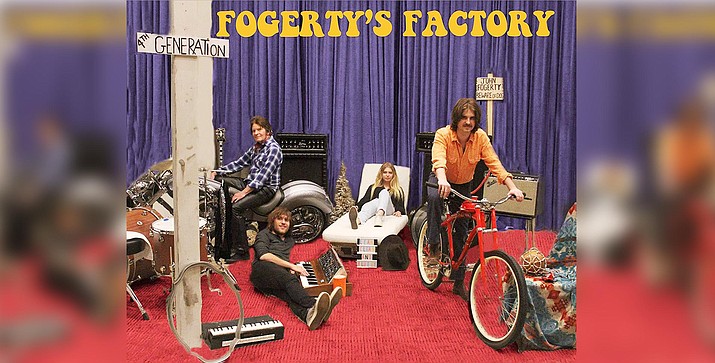 Fogerty’s Factory is a newly recorded album of stripped back tracks from legendary singer, songwriter and guitarist John Fogerty.

Fogerty’s Factory is a newly recorded album of stripped back tracks from legendary singer, songwriter and guitarist John Fogerty.

All tracks were recorded during the lockdown of summer 2020 by John and his family, including his sons Shane and Tyler (who together are the band Hearty Har) and daughter Kelsy.

These versions of classic tunes have featured on The Late Show With Stephen Colbert, NPR’s Tiny Desk Concert and Sirius XM, with this being the first time any of them are available on CD and LP. The first track, “Centerfield,” was recorded on the Field at Dodger Stadium to celebrate John’s 75th Birthday.

Fogerty, with Doug Clifford, Stu Cook, and his brother Tom Fogerty, founded the band Creedence Clearwater Revival (CCR), for which he was the lead singer, lead guitarist, and principal songwriter. The group had nine top-10 singles and eight gold albums between 1968 and 1972, and was inducted into the Rock and Roll Hall of Fame in 1993.

Tracks include: Have You Ever Seen The Rain?, Lean On Me, Hot Rod Heart, Blue Moon Nights, Tombstone Shadow.

The sixth album of German Hard-Rock heroes, gathered by Alexander Beyrott, back with the original line-up with David Readman on vocals, mixed and mastered by Jacob Hansen.

Voodoo Circle are back with “Locked & Loaded” and, like on their second album “Broken Heart Syndrome,” they present themselves with the most convincing line-up in the band’s history.

The band celebrates a vigorous, deeply melodic hybrid of hard rock and melodic metal, equipped with specific quotes and some bluesy elements, with cleverly interspersed cross-references to some of their own role models.

Voodoo Circle was founded in 2008, as a project of Alex Beyrodt who had the idea to re-think his personal vision of music.

Tracks include: Flesh & Bone, Wasting Time, Children of the Revolution.

Accept – Too Mean to Die

Releasing music for over 40 years Accept not only helped launch the genre that became known as metal but contributed staples like “Balls to the Wall”, “Metal Heart”, and more.

“Too Mean to Die” is the band’s 16th album and their fifth featuring US vocalist Mark Tornillo.

This is the first Accept album to feature Martin Motnik, who replaced original bassist Peter Baltes in 2019, and rhythm guitarist Philip Shouse, who also joined the band in 2019.

Accept is a German heavy metal band from the town of Solingen, formed in 1976 by guitarist Wolf Hoffmann and former members Udo Dirkschneider (vocals) and Peter Baltes (bass).

The band’s beginnings can be traced back to the late 1960s, when the band got its start under the name Band X.

Accept’s lineup has changed over the years, which has included different singers, guitarists, bassists and drummers.

Tracks include: Zombie Apocalypse, Too Mean to Die, Overnight Sensation, No Ones Master, The Undertaker, Sucks to Be You, Symphony of Pain, Not My Problem.

Horace Silver – Song For My Father

Vinyl re-release. Song For My Father is pianist Horace Silver’s crowning jewel in a catalog filled with hard bop classics.

The album was inspired by a trip that Silver had made to Brazil. The cover artwork features a photograph of Silver’s father, John Tavares Silver, to whom the title composition was dedicated.

“My mother was of Irish and Negro descent, my father of Portuguese origin,” Silver recalls in the liner notes: “He was born on the island of Maio, one of the Cape Verde Islands.”

His signature tune is a dedication to his father inspired partly by his Cape Verdean heritage. The composition “Song for My Father” is probably Silver’s best known.

As described in the liner notes, this album features the leader’s quintet in transition as it features a mix of tracks featuring his old group and his new line-up after Blue Mitchell had left.

Tracks include: Song for My Father.

Jeff Tweedy – Love Is The King

Love Is The King, a “beautifully honest ode to love and hope,” is the follow-up to 2018’s WARM and 2019’s WARMER, and comes on the heels of Tweedy’s second book, How To Write One Song, out October 13 via Penguin Random House’s Dutton.

He says: “At the beginning of the lockdown, I started writing country songs to console myself. Folk and country type forms being the shapes that come most easily to me in a comforting way. ‘Guess Again’ is a good example of the success I was having at pushing the world away, counting my blessings — taking stock in my good fortune to have love in my life,” comments Tweedy. “A few weeks later things began to sound like ‘Love Is The King’ — a little more frayed around the edges with a lot more fear creeping in. Still hopeful but definitely discovering the limits of my own ability to self soothe.”

Jeffrey Scot Tweedy is best known as the singer and guitarist of the band Wilco.

Tracks include: Love Is The King, Opaline, A Robin or A Wren, Gwendolyn, Bad Day Lately, Even I Can See, Natural Disaster, Save It For Me, Guess Again, Troubled, Half-Asleep.