Three tales from Jerome’s past 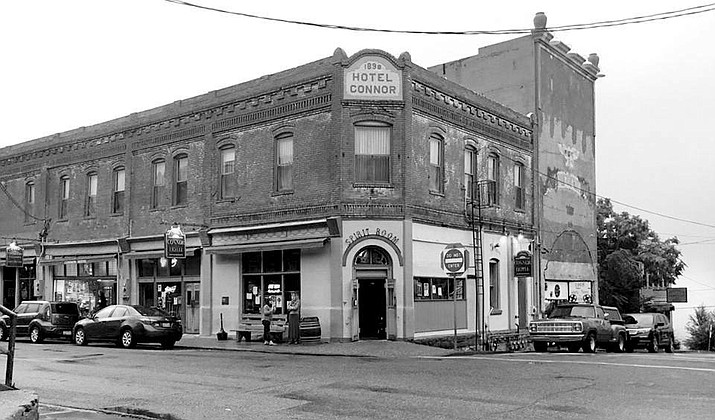 Jerome was dubbed “the wickedest town the West” for a reason. Girls, gunfights, gambling and billions of dollars of metals colored the setting of the classic Old West town.

It was dubbed “the wickedest town the West” for a reason.

Girls, gunfights, gambling and billions of dollars of metals colored the setting of the classic Old West town.

Any quasi-historian or anyone who just enjoys a good ghost story would have no problem yielding riches in Jerome’s historical mine.

From angry mobs to lovers’ quarrels, here are three stories from Jerome’s past.

In 1921, Ann Dohtery Hopkins was a woman of Jerome’s “high society” who lived on what was then called, Company Hill. She was married to United Verde Copper Company’s Chief Engineer, Clarence V. Hopkins

Jerome author Herbert Young describes the marriage as “unhappy” in his book, “Ghosts of Cleopatra Hill,” but the union still gave her social standing.

“As a daughter of poor Irish immigrants, Mrs. Hopkins accomplished her social ascent through the ‘college of hard knocks,’” Young wrote. “She felt a strong distaste for Jerome society, keeping her vow to ‘never become part of it’”

According to young, Hopkins saved her money and purchased real estate in Jerome and Clemenceau which “exacerbated the tensions in the marriage.”

Young wrote that Hopkins was suspicious that her husband was having an affair with school teacher, Lucille Gallagher.

“Unable to tolerate the rumors, of her husband’s infidelity with a Jerome School teacher Lucille Gallagher, Mrs. Hopkins broke down.”

On March 31, 1921, Hopkins attacked Gallagher at the Hotel Connor restaurant with carbolic acid.

According to a March 31, 1921 issue of the Prescott Evening Courier: “Without a word of accusation of warning, Mrs. C V. Hopkins walked up to the table in the Hotel Connor restaurant at Jerome where Miss Lucille Gallagher was eating her breakfast about 8:30 this morning, dashed a tumbler of carbolic acid in the girl’s face.”

According to a May 1921 article in the Sacramento Union, Hopkins was sentenced to 14 years in prison.

“When the judge asked Mrs. Hopkins if she had anything to say before she was sentenced, she replied: ‘I have done no wrong, I am innocent.’”

If it wasn’t influenza, a mining accident or a fire, it was probably a bullet that would end you. This story takes place in 1928 in the so-called “foreign quarter” of Jerome, centered in the Deception Gulch east of the business district.

Involved were Victoriano Jiminez, 24, his wife Maria, 21 and Bernardo Ramirez, 23. It was common gossip at the time that Ramirez and Maria were having an affair, according to Young in his book, “They Came to Jerome.”

Many of Jiminez’s friends encouraged him to seek retribution for Maria’s betrayal.

“Jiminez was well-liked,” Young wrote. “The sympathies of the people were with him.”

According to Young, Jiminez caught his wife and Ramirez together. She fled to another house but was subsequently cornered by a mob of Jiminez’s sympathizers. They brought her back to where Ramirez was already being held captive by Jiminez.

“A crowd had gathered and grown to mob proportions,” wrote Young. “And mob psychology began to prevail.”

Young wrote that many from the mob urged Jiminez to kill both his wife and Ramirez.

Maria eventually was able to tear herself loose from the mob but as she ran, Jiminez shot her twice, killing her instantly. He then turned to Ramirez and shot him twice in the head.

Ramirez disappeared and Jerome Police were never able to locate him, according to Young.

“It was believed that his friends had assisted in his disappearance, either keeping him in hiding or helping him flee the area,” Young wrote.

The headline in the July 31, 1928 issue of The Verde Copper News read:

Many of the first women to arrive provided sexual services when Jerome still consisted mostly of tents and miners. Prostitution, while illegal, was generally tolerated in Jerome, according to Alene Alder in “The Ghosts of Cleopatra Hill.” Jerome law enforcement would periodically crusade some of the bordellos to “clean up” Jerome and force prostitutes out.

Jennie Bauters who was dubbed the richest woman in northern Arizona was a “principal” madam in an area known as “the tenderloin district” which housed girls and bordellos. Her properties had “cribs” in the back which is where the “low-priced” ladies lived in work, wrote Alder.

Her properties burned in all three of Jerome’s big fires. She quickly replaced her buildings as others struggled to raise money. She owned a bordello on Main Street that now houses the Mile High Grill and Inn. Bauters was also the first property owner in the business district to build a sidewalk in front of her buildings.

“She had a reputation for being a generous soul and was always charming to her customers,” Alder wrote.

But like many working ladies at that time, Bauters did not meet a pleasant end.

In 1905, Bauters was shot multiple times and killed by her beau, Clement C. Leigh near Gold Road.

According a Sept. 7, 1905 Arizona Republican obituary, “Leigh then turned the gun on himself and fired once, but bullet penetrating his lungs.”

He laid down beside her to die.

But Leigh survived the gunshot wound and was later hanged for murder on June 18, 1907 in Kingman.