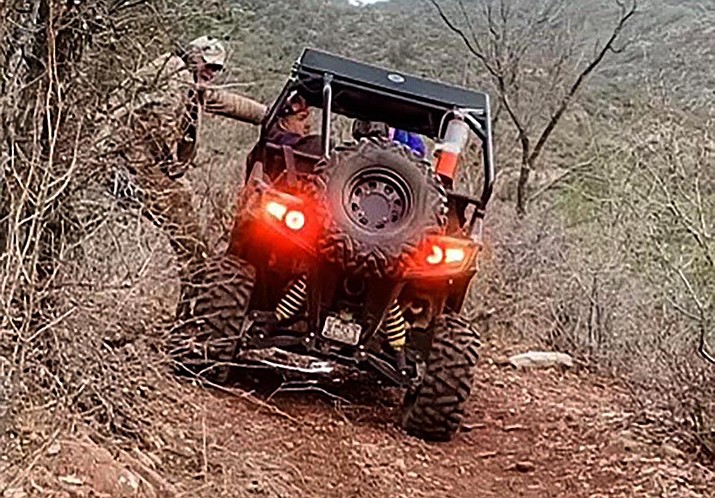 A Jerome police pickup and ATV took three hours to travel the 16 miles of the narrow and unstable sections of Forest Road 413 to reach the couple who overturned their SUV near Jerome. Jason Supple courtesy photo

JEROME - A couple was able to walk away with minor injuries after rolling their 2020 SUV about 20 times down a cliff in a remote part of Mingus Mountain Sunday afternoon, according to Police Chief Allen Muma.

A Jerome police pickup and ATV took three hours to travel the 16 miles of narrow and unstable sections of Forest Road 413, which winds from the top of Mingus Mountain to Jerome, Muma said,

The caravan had to travel about 5 mph and contained firefighters and EMTs, he said.

“It was a brand new vehicle, husband and wife. It rolled 20 times at least,” Muma said.

He could only get a glimpse of the white reflection of the vehicle with his flashlight.

The couple, in their 60s, was standing in the middle of the road and had lit a fire when rescuers arrived.

“They had self-extricated,” the chief said. “They were thankful to be here.”

They went to the hospital, but considering what happened to them, their injuries were minor, he said.

Because it was a new vehicle, all the air-bags must have deployed and acted like a cocoon to protect them, Muma said. Otherwise, they would have had to perform a difficult rope rescue in the dark, he added.

Jerome fire crews were responding from the Jerome side with more equipment and a Yavapai County Sheriff Office SUV came in the same way as Jerome Fire.

“They were just running the trail,” Muma said when asked what the couple was doing on the road.

Muma said he would not recommend the road, which has extreme drop-offs for vehicles.

He said he also does not recommend the road for ATVs, even though it’s passable. If something happens, it’s very difficult for rescue crews to respond out there, the chief pointed out.

The crews spent eight hours on the rescue Sunday, Muma said, and returned at 11:30 p.m. But not until the Jerome police pickup blew a rear tire on the forest road that the chief has nicknamed the “tire eater.”