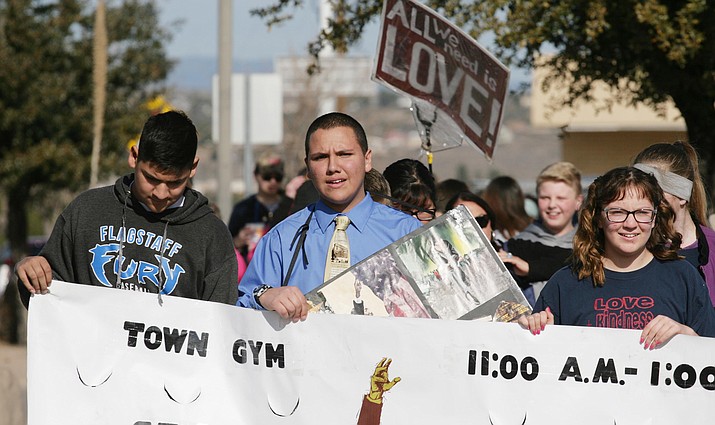 Plante, now 15 years old, led his first march in 2011. Although this year’s march has no specific theme, Plante did explain that a statement Dr. King once made is key to this year’s celebration of the slain civil rights leader.

Plante led his first march at the ripe old age of 6. He said recently that since that first march, he better understands why he cares so much about King.

“That very reason is to continue Dr. King’s legacy and use his methods in today’s society and current issues,” Plante said. “I have learned that God has gifted me with the talent of being able to pass on important information and make others aware of it without any violence.”

Monday’s march will start at 11 a.m. at the Camp Verde Gazebo on Main Street, between the Parks and Recreation and the Historical Society buildings.

The event will begin with the annual walk through Main Street, and follow with an opening prayer by Pastor Brian Wattenbarger of Body of Christ Church. Then, Plante will give a speech about Dr. King and his legacy.

After the celebration there will be a donation car wash with funds going to a local family in need. The Slaughter family recently lost their home in a fire.

Anyone who cannot attend who would like to donate can visit facebook.com/mlkmarchcampverde.

Most years, approximately 300 people attend the event. Because of the pandemic, Plante figures there won’t be as many people in attendance.

“Although this event is expected to me much smaller, I am still doing my best to continue Dr. King’s dream and legacy,” Plante said.