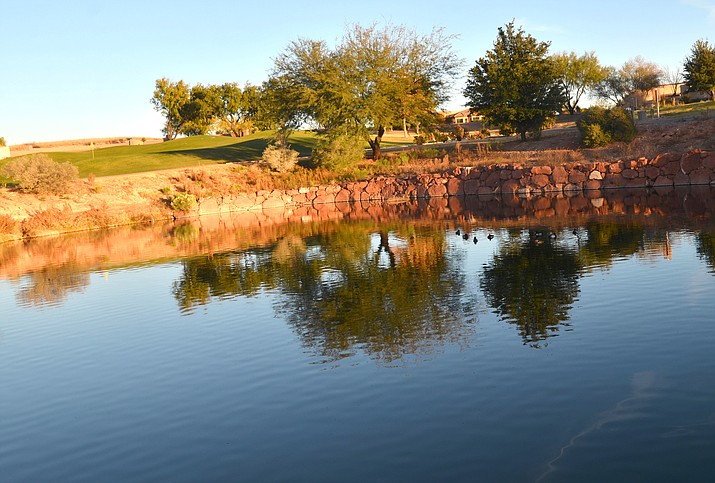 Agave Highlands Golf Course and the Verde Santa Fe Wastewater Co. were each recently issued a notice of violation by the Arizona Department of Environmental Quality for stagnant water and a strong septic odor in a pair of ponds. VVN/Vyto Starinskas

CORNVILLE — Agave Highlands Golf Course and the Verde Santa Fe Wastewater Co. were each recently issued a notice of violation by the Arizona Department of Environmental Quality for stagnant water and a strong septic odor in a pair of ponds.

ADEQ sent a notice of violation to the golf course on Tuesday, Jan. 12, based on a Thursday, Jan. 7 planned inspection. Agave Highlands has 21 days to submit a written plan to remedy the situation.

Agave Highlands course pro Emmanuel Radoccia said his facility has taken the remedial actions recommended by ADEQ. However, there’s no telling how long the remedies of aeration and increased water circulation will take to make an impact — or if those techniques will work at all.

“We’ve put in place the solutions the ADEQ recommended,” Radoccia said. “We’ll see how it goes. It’s a very unpleasant odor for everyone involved — from the people who live here, to guests, to me sitting here at my desk, indoors.”

The violation said ADEQ received multiple complaints of sewage odor, suspected of coming from the golf course. At the time of the ADEQ announced inspection, a sewage/septic odor was noticed by ADEQ in the area of the Verde Santa Fe community and golf course.

Agave Highlands has four ponds that take in water from the wastewater treatment plant, located a few blocks away. Three of the ponds take in the just-treated water through underground pipes and pumps; the fourth, much-larger pond takes on water from a combination of the three upper ponds and from a fresh-water well.

“That lower lake has enough fresh, clean water in it that things grow and live there,” Radoccia said.

On multiple occasions, ADEQ has observed all four in person, and ponds No. 1 and 2 had significant septic odor.

“Pond No. 2 was worse-smelling than pond No. 1 and is smaller in volume and had very little movement/flow/circulation, if any,” the notice reads. “Ponds Nos. 3 and 4 appeared clearer, and had more water movement than the other two. There appears to be very little circulation between the ponds, leading to stagnation, and, presumably, lack of oxygen — resulting in foul odor.”

The violation says low circulation and low oxygen are presumably the causes of the odor, as the ponds are mostly stagnant. Photos of pond No. 2 shows a brown color.

“There was significant septic odor observed here,” the notice says.

The notice includes a series of deadlines for various stages of either completing remedial actions or submitting documentation. Even if the course complies, the notices says, ADEQ could still seek an administrative order or file of a civil lawsuit.

Caroline Oppleman, a communications administrator for ADEQ, said both the treatment plant and the golf course have initiated work to remedy the odor.

The treatment plant receives sewage from the Verde Santa Fe community, which it treats and provides to the Agave Highlands Golf Course for irrigation.

She said recent data from two samplings at Agave Highlands ponds show that the water meets applicable standards for irrigation.

The Jan. 7 inspection was the fourth time ADEQ had been to Agave Highlands since Aug. 26 of last year.

Radoccia said it’s his understanding that ADEQ believes there is too much nitrogen in the water, causing the smell. Through aerating and circulating the wastewater, the thinking is that it will infuse more oxygen into the water, eventually reducing or eliminating the odor.

Radoccia said last summer, ADEQ began testing the water in the ponds due to elevated levels of nitrogen and E.coli. He said the golf course has no control over the quality or the contaminants in the water it receives from the wastewater company.

There is no practical and easy way to send Verde Santa Fe’s wastewater from the plant anywhere else. The three ponds at the golf course are the only outlet for the treatment plant.

Radoccia said using reclaimed water is a common practice for golf courses such as Agave Highlands, which opened in 1997. He also said contained water treatment systems are common in planned communities such as Verde Santa Fe.

The ponds have had others issues through the years, Radoccia said. Before he came on board in the summer of 2018, the ponds were drained to remove excess sediment from the bottom.

Radoccia said in addition to ADEQ directives, the golf course is seeking industry recommendations as well. However, if new directives or ideas come in from any state agency, those take priority.

“Whatever ADEQ says to do, we’ll do it,” Radoccia said. “It’s not a pleasant smell.”