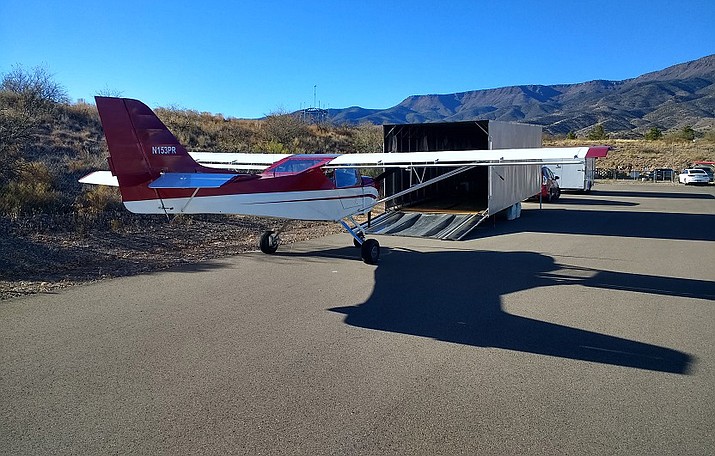 An airplane was stolen from the Cottonwood Airport on New Year’s Eve inside this box truck, Cottonwood Police photo

COTTONWOOD – Police are still on the lookout for a red and white airplane plucked from the Cottonwood Airport on New Year’s Eve.

Just before midnight, thieves forced their way into the Cottonwood Airport and stole an airplane that was inside a box trailer, according to Cottonwood police.

“The trailer and plane have not been recovered,” Cottonwood police said Thursday.

“There was not much video surveillance at the airport. I was told the city purchased additional cameras to expand the areas that are monitored up there,” Cottonwood Det. Matthew Strickland said.

“The subjects entered the airport and stole a box trailer which contained an airplane. These subjects also stole airplane parts while inside,” police said. “The total loss is estimated between $70,000 - $80,000,” police said at the time.

“Subjects were able to gain entry into the Cottonwood Airport by disabling and forcing the main gate open,” police added.

The airport is surrounded by security fencing and signage.

“Federal agencies have been notified/utilized. As for the intended use of the stolen plane and parts, we can only speculate as to why it was stolen and for what purposes,” said Strickland.

He pointed out that the thieves took the time to steal compatible propellers for the plane. The photo on the plane provided by the police has the airplane number N153PR on the wing.

The Flight Safety Foundation Safety Network website, which put out an incident notice for the stolen plane, said it was a Skystar Kitfox Series 5 Vixen and is owned by a private pilot.