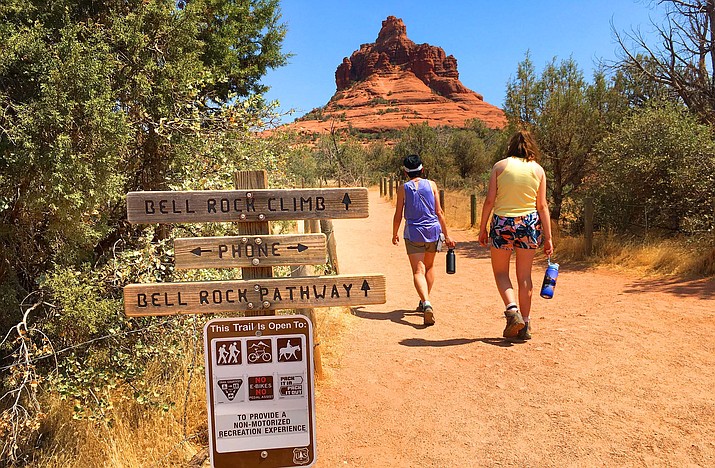 Hikers will be able to hike at Bell Rock again after the Coconino National Forest opened on Tuesday. VVN/Vyto Starinskas

FLAGSTAFF -- The Coconino National Forest will reopen to the public beginning 6 a.m. Tuesday, after closing on June 23 due to fire danger, dry conditions, and persistent wildfire activity.

“Recreation technicians ask for patience as they work to remove gates, locks and barriers throughout the coming days,” according to a press release by the Coconino Forest Service on Monday afternoon.

“The decision to reopen the forest was made based on the amount of recent rainfall that occurred across all three districts of the forest. Stage 2 fire restrictions will be in effect upon reopening,” stated the release.

While the forest-wide closure will be lifted, specific closures around active wildfires – such as the Rafael Fire, Backbone Fire, Slate Fire and Snake Fire – may still be in effect, explained the forest service. A full list of forest orders detailing specific closure areas is available on the Coconino NF’s website.

Smoking (except within an enclosed vehicle or building, a developed recreation site, or while stopped in an area at least 3 feet in diameter that is barren or cleared of any flammable material).

During the hours of 9 a.m. to 8 p.m., operating a chainsaw or other equipment powered by an internal combustion engine for felling, bucking, skidding, processing, road building and woodcutting during industrial operations or firewood gathering capable of igniting a fire.

During the hours of 9 a.m. to 8 p.m., using a blasting, welding, or operating an acetylene or other torch with an open flame.