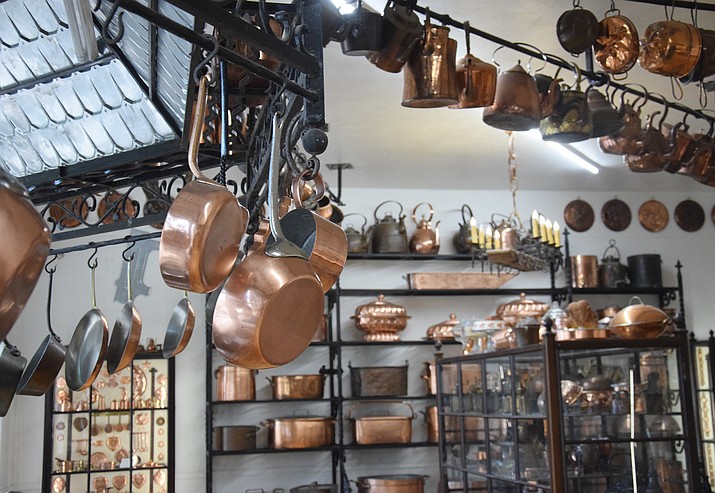 One room at the Arizona Copper Museum, located at Ninth and Main streets in Clarkdale, shows the many ways copper was fashioned into pots, pans, cauldrons, baking tins and every other cooking device or aid you can think of, throughout human history. VVN/Jason W. Brooks

Bathtubs, fire hose nozzles and cognac cooking equipment are a few of the things Clarkdale could use to become an even bigger player in the Verde Valley economy.

With the former classrooms built as part of the old Clarkdale school building now filled with hundreds of types of copper creation, the Arizona Copper Museum has become one piece of what local leaders hope will be a resurgence of the town.

Having recently purchased the former grocery building across Ninth Street, the museum’s expansion means director Drake Meinke and others will help make the museum a major part of a converted, modernized downtown Clarkdale.

“I talked to a park ranger who said ‘There’s nothing open up there,’” referring to downtown Clarkdale, Meinke said.

Meinke, who opened the museum in 2012 as part of Arizona’s and Clarkdale’s mutual centennial celebrations, said he hopes the museum can continue to help anchor the town’s tourism draw. Along with wineries, restaurants and places like Smelter Town Brewery, which opened last year, the Copper Museum shows visitors what brought western Europeans and their descendants to the Verde Valley more than 100 years ago.

Meinke points out that while indigenous peoples used copper ore decoratively, it was white settlers who began to mine it and ship it worldwide, to be used to make everything from cooking utensils to wiring to fine art.

While the 20th-century items in the museum collection aren’t necessarily from lots of finished copper with roots in Clarkdale, it’s a celebration of the metal and how its presence helped build a modern community.

Some of the copper items in the collection might pre-date Clarkdale’s mining history by hundreds of years. However, it’s important to see how the ores of the Verde Valley ended up on other continents in the 20th century.

“Copper is the oldest and one of the most important metals in the world,” Meinke said. So we focus on it as a work of art.”

Some copper mined from the Clarkdale-Jerome area made its way into military use. World War I copper 40mm artillery shell casings can be crafted into vases or other canister-style artistic pieces, both practical and photogenic.

One room at the museum is nearly completely to the “trench art” of artillery shells, in their artistic recreations.

There is plenty of fine art at the museum, ranging from religious works to pieces made by children, perhaps as an assignment. There is also a “kitchen room,” showing the many ways copper was fashioned into pots, pans, cauldrons, baking tins and every other cooking device or aid you can think of.

Copper was used to store water and to mix alcohol and in nozzles for fire hoses. Bathtubs, molds for making chocolate and even the doors to the building include the metal.

There are even displays that show how copper, a naturally occurring metal, creates the color blue as an acidic reaction in so many compound materials.

Wine and beer having become major draws to the Verde Valley in recent years, there’s a room featuring a cognac cauldron and other items used in the production, distribution or consumption of alcohol products.

And as for the former grocery, across Ninth Street?

“We hope, in a few grant cycles, to get the money needed to remodel that place,” Meinke said. “It’s important to have vibrant-looking building on that corner, because when folks come up the hill to the stop sign and enter downtown, that corner is the first place their eyes go.”