Dance to "The Classics" at Sound Bites Grill 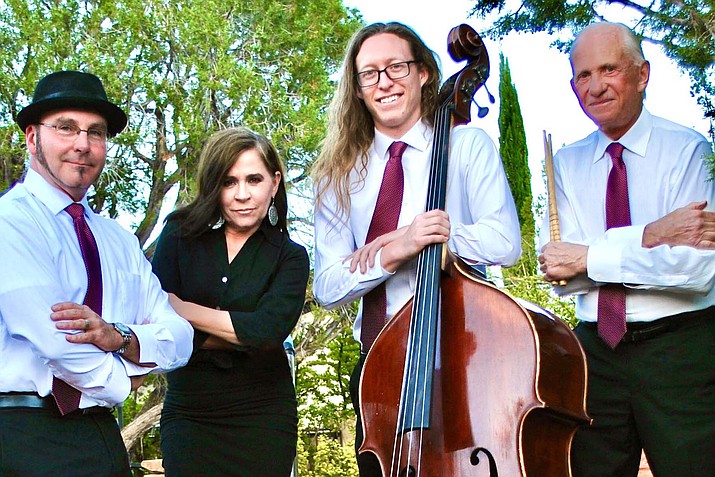 For the past five years, The Classics have serenaded audiences, both young and old, with their smooth renditions of the most memorable songs of the past, ranging from those of the Big Band era to 80s power ballads. And now, with an all-new cast of musical pros, they have added some contemporary selections to their repertoire destined to become classics themselves.

For the past five years, The Classics have serenaded audiences, both young and old, with their smooth renditions of the most memorable songs of the past, ranging from those of the Big Band era to 80s power ballads.

Now, with an all-new cast of musical pros, they have added some contemporary selections to their repertoire destined to become classics themselves.

Be sure to bring your dancing shoes Sunday, July 11, 6-9 p. m., at Sedona’s Sound Bites Grill for all the upbeat and very danceable numbers the group will perform, such as “The Twist,” “I’ve Got You Under My Skin, “Route 66” and “Fly Me to the Moon.”

And prepare to snuggle with that special person during a number of moving ballads, to include “When I Fall in Love,” “How Do You Keep The Music Playing,” “I’ll Always Love You” and “Moon River,” just to name a few. A variety of Latin and up-tempo songs will be played, as well.

George started his musical journey as a drummer with various high school and college dance bands. His path then led him to earn his PhD in Electrophysics and a career in the field. Bein was overjoyed to return to the drums, first joining the percussion section of the Cottonwood Community Band, and now, as the founder of his own band.

Bein said, “I am delighted to have such talented musicians join The Classics. Whether you want to sit and relax or get up on the dance floor, you are in for an amazing experience”.

Anne Johnstonbrown hails from the Los Angeles area where she worked for nearly 30 years as a professional actor and filmmaker. She also worked as a Professor of Theatre Arts at a number of SoCal universities, including the American Academy of Dramatic Arts, Los Angeles, where she taught acting, auditioning and the business of acting.

As a teenager, Anne began a songwriting career which resulted in international success. Today, her songs can be heard worldwide in both the gospel and pop music markets.

Currently, she splits her time between her homes in Las Vegas and Sedona and considers herself semi-retired. However, she continues to work as an award-winning voice actor and sound engineer and enjoys a beautiful life with her husband, Tom, of 32 years.

David Vincent Mills is a composer, improviser and performer whose roots are in jazz and classical music, as he studied both piano and trumpet from a young age.

He has also toured with American Idol’s Kimberley Locke and has shared the stage with Eric Marienthal and Bobby Shew. Mills has been a studio musician, as well as a producer, for numerous recording artists in the genres of jazz, rock and folk. His most current project, the band DiVoM, features his compositions in the style of what Mills’ coins as ‘junk’ – i.e., jazzy funk. A debut CD of this band was released in 2013.

He has won the title of first All-State Jazz bassist of Arizona two years in a row. He also participated in the All-State orchestra twice, taking first the second time.

Jason also played bass with Sugar and the Mint for several years, during which they won the Telluride Bluegrass Festival and toured the bluegrass festival scene.

He is currently pursuing a bachelor’s degree in performance at Northern Arizona University, where he has been fortunate enough to win the concerto competition, sit principal bass in the symphony and chamber orchestras, and play in jazz combo one.

Sound Bites Grill at 101 N. State Route 89A, is located in the Hyatt Pinon Pointe shopping center in Uptown Sedona.

This event is free of charge.