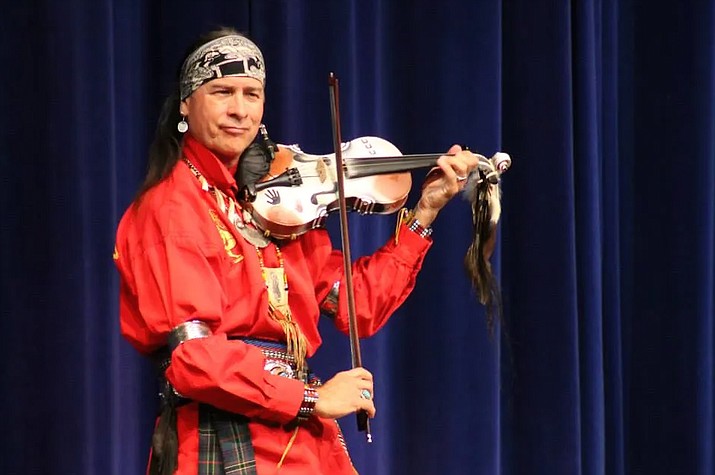 Of his 25 recorded CDs, Bird will pull music from his three Animal Totem CDs, Native, Contemporary and World Music genres.  His brand is a reflection of his mixed-blood American Indian and Celtic heritages.

With his violin, fiddle, Native flutes, and Irish whistles, Bird weaves a powerful tapestry of music and stories of animal’s spirit/totem powers.

Classically trained as a violinist, Arvel Bird’s Animal Totems’ concert, compositions and performances are a confluence of styles from Celtic, bluegrass and his original Native American folk and Celtic rock orchestrations.

As he worked to develop his own music style and a large following, Bird went wherever the music called him, which led him away from classical and toward Bluegrass, Appalachian, Folk and Celtic.

During his years in the Midwest, Bird won the Indiana State Fiddle Contest four times while still perfecting a variety of performance styles.

From 1986 to 2000, Bird toured with Glen Campbell, Loretta Lynn, Tom T. Hall, Ray Price, Louise Mandell, and Clay Walker. During his 13 years in Nashville, he built a master recording studio to help him launch his own independent record label, Singing Wolf Records.

Initially the studio provided him with a haven to write and record his own music, and later recorded hundreds of songs and album projects for songwriters and independent artists.

One of Bird’s favorite aspects of touring is the worldwide travel to Scotland, England, Ireland, Australia, New Zealand, Canada and in prestigious locations including the Sky Dôme in Toronto.

A prolific songwriter, Bird released his 24th and 25th CDs in 2016 adding to his two EPs and two DVDs. Five of his releases have earned him international music awards.

One of his most cherished is for his classical recording, Tribal Music Suite: Journey of a Paiute, a Celtic and Native American concerto for violin and Native American flute, that earned him Best Instrumental Album and Best Producer/Engineer (with Grammy-winning producer Tom Wasinger and Nashville engineer Chas Williams) at the Canadian Aboriginal Music Awards.

Although once based in Nashville, Bird is now settled in Cottonwood still connecting with audiences the old-fashioned way ... live. This is where Bird’s emotionally driven performances thrive, igniting concert venues, symphony halls, festivals and more, leaving his audiences inspired, transfixed, and transformed. www.arvelbird.com facebook.com/thearvelbird

Tickets for the concert are $25 in advance or $35 at the door. Ticket Link: https://bit.ly/Arvel-Bird-Concert