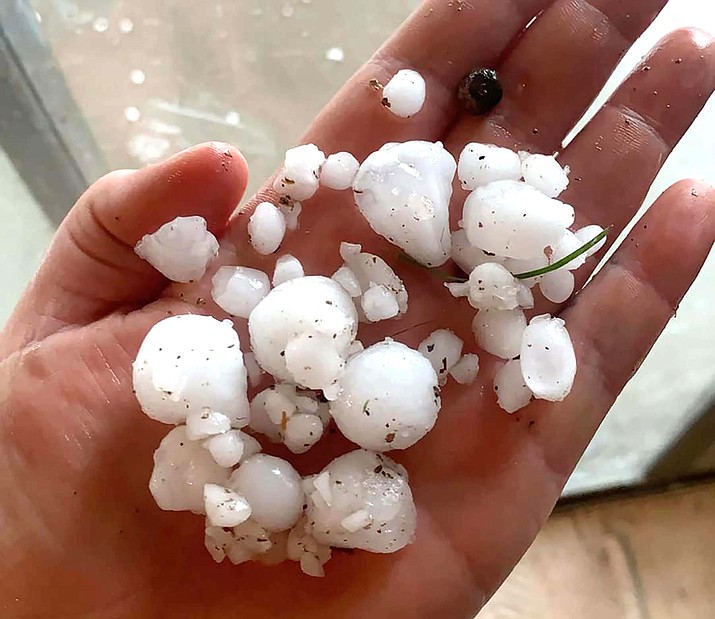 Amelia Rose collected half-inch size hail in the palm of hand in her yard in Rimrock on Friday. Courtesy of Amelia Rose

RIMROCK - A severe thunderstorm rolled through Rimrock and Lake Montezuma Friday afternoon painting the community white with hail and leaving behind wind damage that destroyed a mobile home.

No one was injured in the storm, including the single person who was displaced from the mobile home located in the area behind Family Dollar, explained Copper Canyon Fire & Medical Battalion Chief Dan Elliott Monday.

The roof came off and blew off one of the walls, he said. The person was not home and the county red-tagged the home, Elliott added.

That was the only home destroyed in the storm that poured down about 3:30 Friday afternoon, he said. But there were a lot of power lines down and some metal sheds blew away. “It was just to the Montezuma-Rimrock area.”

Manny Romero of Rimrock said the storm blew through his property and caused lots of damage.

“It threw my kids’ four-story playhouse several-hundred feet and smashed it into pieces.” His fence was also knocked down.

Right after the storm, Romero put out a Facebook plea for anyone who may have seen their little rooster, which blew away in the storm.

Unfortunately, Romero reported the next day that the rooster was found deceased. “Looks like the storm got the best of him.”

Other residents in Rimrock reported that the storm was a microburst with golfball and larger-sized hail.

Victoria and Craig Gates of Rimrock, who still can’t find the roof to their storage shed, videotaped the storm as it turned their green lawn to a sheet of snow-white carpet of hail. Amelia Rose collected half-inch size hail in the palm of the hand at about 3:40 p.m. in her yard in Rimrock.

Residents reported roof damage to homes and sheds, horse corrals blown over, flying trampolines, trees and shrubs stripped of leaves, fences knocked down. “My garden looks like a shredder went thru,” said one Rimrock resident on Facebook.

Another resident reported losing power when their power pole ripped out of the ground. The wind tossed their truck-bed topper 300 yards down the wash too.

“Made our patio roof look like Swiss cheese. It was bad. Cringed at every hail ball hitting my car,” wrote another.