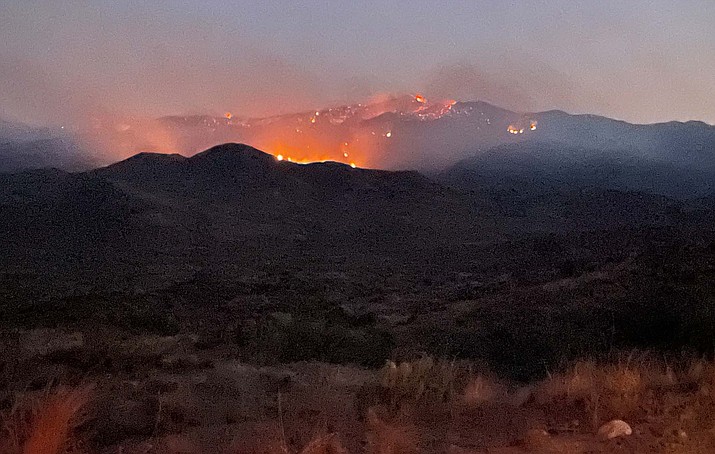 VERDE VALLEY — Activity for the Tiger Fire continued to decline Sunday into the afternoon with increased humidity in the Crown King area, according to fire officials Monday.

“Although area thunderstorms to date have not supplied significant rain on the fire, they have been a daily event in the surrounding area and have increased humidity levels,” a news release from the Southwest Area Incident Management Team stated. “The effect has been diminished fire activity as lighter fuels absorb moisture associated with higher humidity and quickly becoming less flammable and unavailable to ignite larger fuels.”

The lightning-caused fire has charred 16,246 acres as of Monday afternoon, July 12. It is now 43% contained with 319 total personnel working the blaze.

There are still hotspots within the Tiger Fire, which is 11 miles east of Crown King, which include the Dead Cow Springs area and south of Horsethief Basin on the fire’s western flank.

“There were also some interior isolated smoke columns appearing within the fire footprint as isolated pockets of fuel continued burning,” a news release stated.

Monday’s fire operations plan consisted of a robust initial attack division to handle anticipated local lightning and continued point protection and suppression repair work on Crown King and Horsethief Basin roads. Crown King residents may encounter traffic delays from grading and mastication work along roads leading into and out of their community.

The community of Crown King remains in a “Set” status for Code Red, according to the Yavapai County Sheriff’s Office (YCSO).

Passing thunderstorms in Yavapai County ignited a wildfire south of Prescott that has burned 100 acres, according to Prescott National Forest spokesperson Debbie Maneely on Monday.

The blaze is five miles south of Ponderosa Park in the Hassayampa drainage, east of Wilhoit.

“Firefighters are focusing on slowing forward progression of the fire as quickly and safely as possible,” Maneely stated. “There are no values at risk in the immediate fire area.”

A brush fire 28 miles northeast of Cave Creek is 0% contained and has charred 2,784 acres, according to fire officials.

With 146 total personnel working the blaze, Sunday saw precipitation fall over the Middle Fire, reducing fire activity in some areas.

“Despite receiving a quarter to a half inch of rain, the fire grew over 350 acres to the north through grass and light brush over Long Mesa,” a news release stated. “Firefighters continue to scout for viable roads and access points into the Middle Fire. Rugged terrain and impassable roads are preventing direct access in and out of the fire area. Firefighters are working to protect critical infrastructure in the area, including powerlines managed by the Western Area Power Administration (WAPA).”