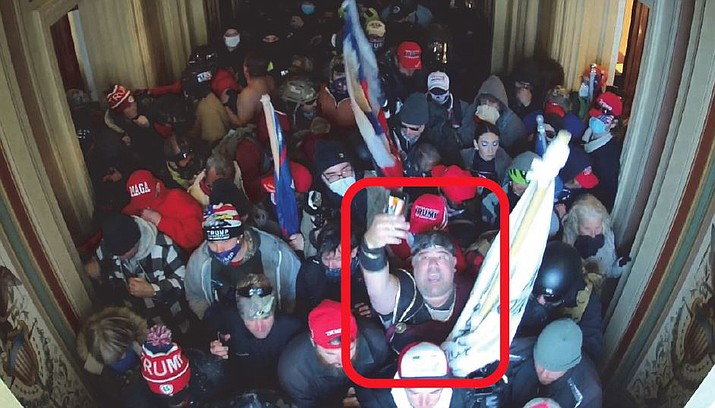 This image, one of several included in a federal court complaint filed this week, appears to show Nathan W. Entrekin of Cottonwood at the Jan. 6 insurrection at the U.S. Capitol. Entrekin was arrested Thursday in Cottonwood and charged with two federal crimes. Courtesy of U.S. District Court for District of Columbia 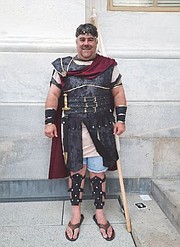 COTTONWOOD - A Cottonwood man was arrested Thursday and charged with two federal crimes for his alleged actions Jan. 6 in the insurrection into the U.S. Capitol building.

Nathan Wayne Entrekin is charged in the U.S. District Court for District of Columbia with knowingly entering or remaining in any restricted building or grounds without lawful authority and violent entry and disorderly conduct on Capitol grounds.

Images from both security footage and from Entrekin’s phone show him in the Capitol on Jan. 6, along with hundreds of other people, around broken windows and in unauthorized areas. Entrekin is described in the complaint as “standing out from the crowd, due to outfit he chose to wear on Jan. 6, in part because of the (40-degree) temperature, and partly because of the unique nature of the costume.”

Entrekin was dressed in what prosecutors describe as a Roman gladiator costume. He also carried a stick with a banner on it, with a Book of Mormon verse handwritten on it.

The complaint also has excerpts Entrekin had with fellow alleged insurrections in and around the Capitol on Jan. 6. In explaining the verse on the cloth, he gave an elaborate response on video.

“I am Capt. Moroni,” the complaint quotes Entrekin as saying on video. “I am the William Wallace of the Book of Mormon … And around, I like to say, 76 BC, because 1776 is so popular — but before Christ came to Jerusalem, in this land, the Book of Mormon is about this land, right? The same fight for freedom, this land, the same land, the Native Americans, they have Jewish DNA, descent …’Cause a lot of people are like Mitt Romney … there’s a lot of infiltrators in our nation, in our Capitol, in our churches. I think Mitt Romney might be one of those people. They have sold out to the system.”

Images taken by Entrekin, on a phone, show he was in the Senate Parliamentarian’s office and the office of Democratic Senator Jeff Merkley of Oregon, among other unauthorized parts of the Capitol and its grounds.

In another excerpt, Entrekin is quoted on what he said upon heading into an office, amazed, as the crowd is chanting “U-S-A! U-S-A!’

Entrekin’s photo is on several websites that list notary publics in Arizona. A linkedin.com profile shows his photo and lists orionsigners.com as his notary website.

Entrekin’s court records includes a 2000 federal conviction for mail fraud, some minor traffic violations and a dispute with a mortgage company.

Efforts to contact Entrekin, or any family he could have in the area, have been unsuccessful as of this writing.