Real Music, Real Lives – The Story Between The Notes 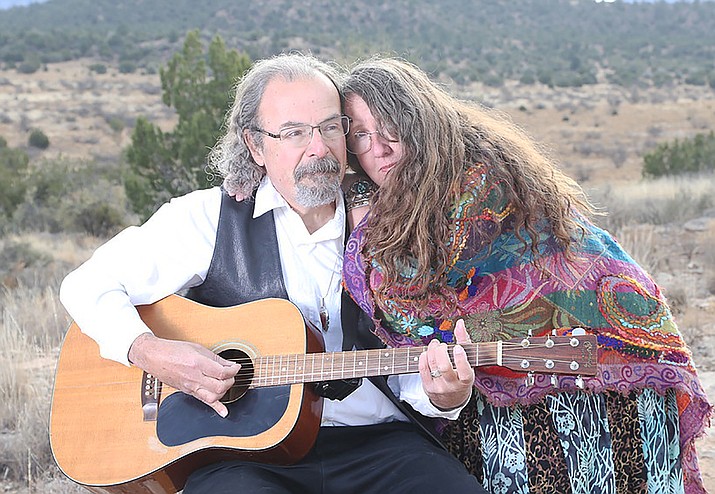 Larry and Leslie Latour are returning to Sedona to perform music from the documentary “Larry & Leslie Latour: Real Music, Real Lives – The Story Between The Notes.”

They will perform in the Verde Valley at the Mary D Fisher Theater in two filmed invitation-only evenings of always fun and poignant song, Saturday and Sunday, July 24-25, 12:30 p.m. Doors open at noon.

The shows are free of charge with special invitation, and if you are a fan, if we missed you on the invite list, or if you would just like to be part of this fascinating project, we do still have a limited number of invitations available by texting 323-868-3185.

The documentary “Larry and Leslie Latour: Real Music, Real Lives (The Story Between The Notes”) follows producer Brad L. Johnson from Maine to Arizona and back as he explores the lives of Larry & Leslie Latour. Journey together from the turbulent ‘60s to a COVID ridden 2020 where these two performed 67 and counting virtual concerts “Larry and Leslie at Pushaw.”

Trials and tribulations, joy and sadness. Tales of Leslie living on a lobster boat, digging clams, picking dump, running a trap line and painting wildlife, having a son, and singing.

Tales of Larry balancing academia, PhDs, and music through a teaching career that morphed into music in his 40s. Music brought these two together, and love gave them “a life uncommon,” to become a fan favorites in the world of their music.

Singer/songwriters and Sedona Valentine’s Day favorites Leslie and Larry will bring you an emotional and heartfelt collection of tunes about love and life’s entanglements in the intimate set- ting that is the Mary D. Fisher Theater.

As always, they will spin their original story songs into a reflection of their lives in love together, singing their two-part harmonies and taking the audience on a heartfelt journey. Special guests Paul Perreault and Holly Raccoon of Flagstaff on Saturday, and Patty Hoisch and Patricia Fonseca of the Sedona folk band Yarrow on Sunday, will join the Latours to add a few heartfelt songs of their own.

Larry & Leslie have been singing together (and married) for 15 years.They have five CDs of music, four of them original (Little by Little, That’s Life, and Real Music and Real Music Two), and one a CD of Woody Guthrie style folk tunes (including This Land is Your Land of course). In addition, they are finishing up a fifth collection of original tunes, Real Music Three out in the Fall. All of these are digitally available on CDBaby.com, Spotify, and iTunes. A small sample of tracks includes Stranded, an autobiographic “what if” love song, Bangor Fair, about falling in love under a dance tent in Maine, The Winds of Autumn, about dreams of life and love come true, and The Phase of My Life, about growing old together.

The Latours make the room and audience their own wherever they perform, telling stories and singing funny and poignant tunes in an intimate style.

Kate Hawkes of Red Earth Theatre said, “Larry and Leslie live what they sing. Joy, partnership and laughter ring through their music and performance.” Jennifer Cohen, host of Cable TV’s Yavapai Broadcasting Verde Valley Experience gushed, “I love how they harmonize with each other, how they are with each other. There’s a sweetness that descends over them when they perform. It’s visual, it’s audible, it’s a wonderful thing.”

Larry and Leslie have together played an integral part in creating the Sedona Hub Music In The House performance series from 2016-2019, and they were instrumental in helping to create the Camp Verde Library “Music In The Stacks” series, now in its fifth year. They’ve done “listening room” shows all through the Verde Valley, Prescott, and mid-Maine, including the WERU Fair, the Penobscot Theater, the four-masted Margaret Todd schooner out of Bar Harbor, and the Sunbeam Ministries boat touring and servicing the Islands off of the mid-Maine coast.

The musical couple both grew up in the New York City area in the ’60s and ’70s and met in Bangor, Maine. Leslie was raised in a family of musicians and artists with connections to the Seeger family, and Larry was strongly influenced by musicians such as James Taylor, The Beatles, and folk icons Pete Seeger and Woody Guthrie. Recently they participated in a benefit concert for a proposed American Center for Folk Music in Pete Seeger’s hometown of Beacon, NY.

Text Producer Brad L Johnson at (323) 868 3185 if you would like to arrange an invitation. Each attendee will receive a notice that they are likely to be filmed in the production of this documentary.

• What: Leslie and Larry Latour “Real Music, Real Lives – The Story Between The Notes”

• Tickets: This is an invitation-only location shooting but a limited number of free invitations are still available.