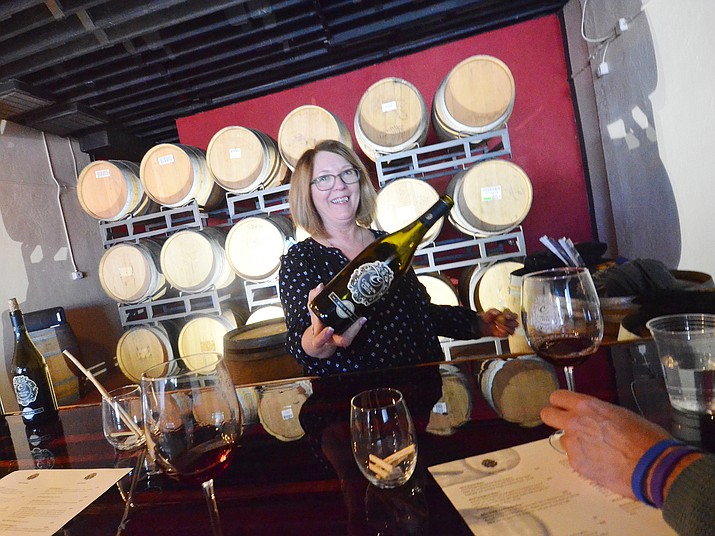 On a weekend, or most evenings year-round, you can turn a corner on North Main Street and see and hear a celebration of viticulture.

Wine establishments, some of which are part of the Verde Valley Wine Trail, are prevalent along Main Street in Old Town Cottonwood. With a heavy focus on wine made from Arizona-grown grapes, there is a red, white or rosé for every taste.

The Old Town establishments are part of a Verde Valley wine region that includes the viticulture and oenology programs taught at nearby Yavapai College, as well as establishments found in Jerome, Clarkdale, Camp Verde, Sedona and the Page Springs area of Cornville.

Many wine enthusiasts make Old Town the focus of a trip into the Verde Valley.

In 1976, Arizona Gov. Raúl Castro wanted to establish wine grapes as a new cash crop in the state. He helped develop a $95,000 grant to conduct a full statewide study and tied in New Mexico, Colorado, and Utah, making it a “four corners” study with shared data.

The first state winemaking license was issued in 1982.

All quality wine grapes in Arizona are grown between 3,000 and 6,200 feet, according to Paula Woolsey, vice president of the Verde Valley Wine Consortium’s Board of Directors.

Grapes are grown in parts of the state with varying temperature ranges. For example, Sam Pillsbury’s wine grapes are grown in the Wilcox area, which has an elevation of about 4,100 feet. Carlson Creek wine is from grapes grown in the Paulden area — at 4,400 feet and just over Mingus Mountain from the Verde Valley.

Some wine is grown even more locally. Maynard James Keenan, known best as the singer for the band Tool, owns vineyards in both the Verde Valley and Willcox and is in the process of establishing a small vineyard near Old Town Cottonwood.

Keenan also owns Merkin Vineyard’s Osteria (a wine and food establishment) in Old Town Cottonwood. As of June 2021, he was also in the process of setting up a wine-and-more store in a former bank building he bought from the city.

Woolsey said the Verde Valley is closing in on securing an American Viticultural Area designation, or AVA. The valley has secured its place in wine culture, repeatedly placing among the top 10 in a USA Today list of the 10 best wine regions in North America.

She said the consortium is working on a phone app that will allow a digital “stamping” of the wine trail locations.

The Wine Trail goes back more than a dozen years. A major matching grant was obtained in 2009 by the Cottonwood Chamber of Commerce for its branding.

“We want to finally convince reviewers, journalists and the public to stop calling us ‘the next Napa Valley,” Woolsey said. “We have our own wine and food identity.”