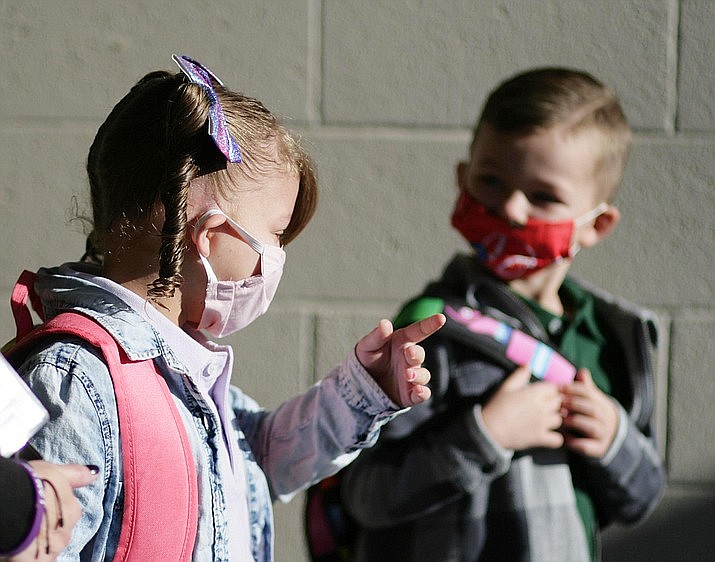 Dr. Cara Christ told Capitol Media Services she still believes that the best place for children is in school. "It's the safest place for kids,'' she said, though she said unvaccinated students should be wearing masks even though state lawmakers have now prohibited districts from requiring their use. VVN file/Bill Helm

PHOENIX - The state's top health official said Tuesday that schools should be able to quarantine unvaccinated students and keep them out of class in at least some cases where they have been exposed to COVID-19.

Dr. Cara Christ told Capitol Media Services she still believes that the best place for children is in school.

"It's the safest place for kids,'' she said, though she said unvaccinated students should be wearing masks even though state lawmakers have now prohibited districts from requiring their use.

The key, she said, is making case-by-case decisions.

"I don't think we want to be taking broad, sweeping, quarantining entire schools if they've got a case of COVID-19,'' the health director said.

But Christ said that there are circumstances where separating out some unvaccinated students -- and maybe even some who are vaccinated but have underlying health conditions -- may be appropriate when there is a confirmed case in a school.

"Isolation-and-quarantine does remain a tool that's available to local public health (agencies) when they are working with school districts,'' she said. And that guidance remains in place, Christ said, even after Gov. Doug Ducey, through his health policy advisor, told school districts they cannot require that unvaccinated students be quarantined even if they have had contact with someone with a confirmed case of the virus.

In fact, Christ said, that guidance is again under review with the spread of the more highly contagious Delta variant of the virus. And it could result in recommendations for greater use of quarantines.

"One of the things that we're talking about here at the department is, with how transmissible it is, that all close contacts should be quarantined potentially,'' she said.

Several school districts and health departments already were resisting Ducey's directive, arguing that the question on the use of quarantines for unvaccinated students is beyond the governor's authority.

Christ, in her interview, did not address what the governor has ordered. But she said the policies and guidance of her agency, including the use of quarantine for unvaccinated people who have been exposed, has not changed since that letter went out to school districts.

And, more to the point, she said any across-the-board ban on quarantines is not the right way to go.

"Schools should work with their local public health departments to determine the best course of action if they have cases'' of the virus, Christ said. The question is particularly important at the lower grade levels, she said, where there is no vaccine option.

But she did say that any action has to be reasonable.

"We don't recommend that it's just a blanket quarantine of everybody who's unvaccinated,'' she said. That's where follow up and input from local health departments comes in, with decisions on a case-by-case basis.

"They work on those contact tracing investigations and make specific recommendations for quarantine, 'watch and wait,' all different types of strategies depending on that close-contact specific situation,'' Christ said.

She said that can involve making recommendations to families whose children are not vaccinated.

"What we want to make sure is we're not just using unvaccinated status as a sole reason to quarantine people,'' she said. "And that's not how public health works.''

None of this affects the ability of districts to prohibit students who are infected from coming to school.

The discussion of the use of quarantines comes as the number of cases of the virus is on the upswing, routinely topping 1,000 a day, a rate Arizona has not seen since the end of February. But the health director said there's no cause for alarm.

"I think we're in a different place than we previously were,'' she said. And the key is the availability of the vaccine.

"We have a tool that is highly effective in preventing hospitalizations and deaths,'' Christ said.

Still, just 3.3 million Arizonans are fully vaccinated out of about 7.2 million Arizonans. That includes both those who won't get inoculated as well as those younger than 12 for whom the vaccine has not been approved.

That, in turn, goes to what has become another highly charged political issue: masks.

"We have not changed our public health guidance here in Arizona,'' Christ said. "So if you are unvaccinated, we would recommend you wear a mask when you're around people you don't live with.''

Ditto, she said, for vaccinated people who are at high risk.

That's personal for her: She has three children, two of whom are not old enough to get inoculated.

"Those two will be wearing masks to school even though the school district is not requiring it,'' Christ said.