10,726 newspapers later, this is goodbye 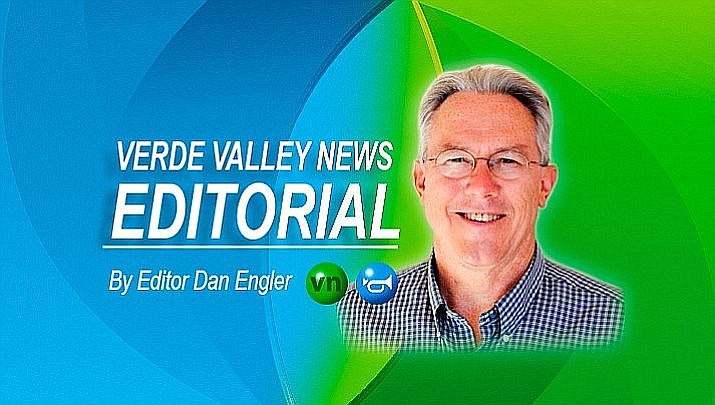 I’m a bundle of emotions today.

This is my final day as editor of the Verde Independent.

No sooner had I turned on my computer than a gentleman named Joe Zepeda handed me a stack of “paper dummies.” He informed me I had to have the paper done and ready to hit the presses before midnight Tuesday. The publisher had pushed the deadline by several hours in order that we could have results of the first Sedona incorporation election on Page 1 the next morning.

By mid-morning, we heard the first rumblings of a big state police drug raid up in Jerome. Elected officials, even the police chief, were among those arrested.

It was shaping up as a busy news day.

And so it’s been for the past 35 years at the Verde Independent. Never a dull moment. Toss in my previous eight apprenticeship years at the Arizona Daily Sun in Flagstaff and the past 43 years of my life have been spent in newsrooms.

The bottom line of the past 35 years here at the VI adds up to 10,726 newspapers produced on my watch. That includes 4,568 issues of the Camp Verde Bugle, 1,012 issues of Kudos, 296 editions of The Villager and 4,850 installments of the Verde Independent. We began online news delivery at the Verde Independent March 1, 1997, which basically turned our newsroom into a 24-7 operation.

I’ve spent two-thirds of my life in the news business.

Of all the emotions I’m feeling today, none compares with an overwhelming sense of gratitude.

I’m grateful I was able to give my all to this business for 43 years. I’m grateful to be walking away from it on my own terms.

I’m grateful to the Soldwedel family and Western News & Info for allowing me to practice and perfect my craft for the past 35 years.

I’m grateful I landed in Cottonwood. I first visited the Verde Valley in 1976 while attending Northern Arizona University. I knew immediately the Verde Valley would be a perfect fit for me. I always expected I would live and work here.

I’m grateful to have had the pleasure of working with some of the finest news professionals in the business. During my years in Flagstaff, I was especially fortunate to work in the same newsroom as Paul Sweitzer and James M. Coffroth.

There are no words to describe the level of excellence Mr. Sweitzer demanded of himself every single day, with every single story he wrote. He was the best in the business. I am grateful he took an interest in me, and shared everything he knew about being a news reporter. One of the finest compliments I’ve ever received was a letter from Mr. Sweitzer upon his retirement in which he wrote, “It’s good to know I am leaving something behind, for the future, than all those damn bylines.”

Mr. Coffroth represented one of the most cherished friendships I’ve had. We first met while I was attending Northern Arizona University. By luck of the draw, he was my faculty advisor. He was a task-master, something I badly needed. I was not what you would call a dedicated student. But, thanks to Mr. Coffroth for doggedly keeping me on course, I did eventually earn a bachelor-of-science degree from NAU.

A few years later, I was working side-by-side with Mr. Coffroth in the newsroom of the Arizona Daily Sun. Flash forward a few more years: I had begun work here at the Verde Independent. We had just launched the Camp Verde Bugle. One day I get a phone call from Mr. Coffroth. He had retired. He was building a home in Lake Montezuma and itching to get back to work. He suggested I hire him to work at the Bugle. I took his advice. Best decision I ever made.

While I’m on the subject of newsroom colleagues, I have to give a shout out to Richard N. Velotta, Larry Crittenden, Gary O’Brien, Cindy Barks, Larry Fowler, Steve Ayers, Jim Fossum, Krista Schlyer, Raquel Hendrickson, Chris Myers and Tom Tracey. These are the editors, reporters, graphic designers and photographers that would make up my Dream Team newsroom. I’ll forever be grateful I had the opportunity to work side-by-side with such elite journalists.

I also must mention a guy I never worked with, but always wanted to. Peter Corbett and I just missed, by a few years, the chance to work together here at the Verde Independent. Many times over the years we discussed working together, but for a variety of reasons it never came to be. Despite never working together, I still consider Mr. Corbett a colleague. His advice, guidance and counsel have always meant the world to me.

One of the greatest things about working in the news business are the indelible memories you are left with. My mind is a treasure chest full of the kinds of stories you could never make up and enough quirky characters to last a lifetime.

Two memories in particular stand out.

The first was the Verde River flood of 1993. Unless you were here to personally experience it, there are no words to describe the ferocity of that deluge. For roughly a 26-mile stretch beginning in Clarkdale’s Patio Town to Verde Lakes Estates on the eastern edge of Camp Verde, the river swelled to a half-mile in width. It was moving water at the rate of 100,000-plus cubic feet per second.

While working with little to no sleep for three straight days, I can’t say I knew I was documenting something never before seen on the Verde. I was fully aware, though, that this was something the likes of which I had never experienced and likely never would again.

It was also the first time I became acutely aware that news professionals are expected to be at their very best during life’s worst moments.

The second big memory was the July 5, 1992, arrest of bank robber and murderer Danny Ray Horning. Horning had escaped from the Arizona State Prison where he was serving four consecutive life sentences. Spending the next 54 days on the run, the search for Horning represented the longest, and largest, fugitive manhunt in Arizona history.

On his last day of freedom, Horning kidnapped two people at the Grand Canyon and stole their car. He then led police on a high-speed chase for more than 100 miles before wrecking the stolen car near the Rocky Park Road exit off I-17.

He then took off running through the rugged Jacks Canyon area in the torrid heat of summer, carrying a bulky single-action revolver with a team of dogs chasing him. Several hours later, Horning was seen drinking from a water hose in the Pine Valley subdivision in the Village of Oak Creek, where he ultimately was arrested.

My phone rang at about 2 a.m. A sheriff’s deputy told me if I got in my car right now and drove to the Camp Verde Jail, I would be able to get photographs of the arrest of the infamous Danny Ray Horning.

At the time, the Horning manhunt was the leading news story in the entire United States. Every major news organization in the country was chasing this story. When Horning was finally arrested, I was the only reporter there to document it.

Not only did I document it, but then-Sheriff Buck Buchanan gave me unrestricted access to everything that was going on. He ordered his deputies to open the gate to allow me picture-perfect access to photograph Horning being escorted to the jail, for which Sheriff Buchanan made sure he was in every single picture. I was allowed access into a holding room where Horning was handcuffed to a chair. I was able to interview Horning for a half-hour, without any police restrictions.

On July 5, 1992, the arrest of Danny Ray Horning was the biggest news story in the United States. I was the only reporter on scene covering it live. It absolutely does not get any better.

I’m also grateful that this business provided me with the greatest honor I’ve ever experienced. When much-loved local musician Danny Rhodes died in May 2008, long-time friend Marguerite Laurie called me with the sad news. I immediately drove to the office, called the local mortuary and asked Steve Palmer when I would receive the obituary.

His response: Danny’s wife, Lisa, wanted me to write it. I wiped away a few tears and went to work on the story. About a week later, I disposed of every award and plaque I had received over the years. I was done with “contest journalism.” No award I could ever receive would measure up to having Lisa Rhodes say she wanted me to write her husband’s obituary. It was the greatest honor of my career.

I’m also grateful I was able to live and work in the same community as former City Manager Brian Mickelsen. Brian and I became friends while attending NAU. I was on a ladder at my then-home in Cornville when my wife told me Raquel Hendrickson had left a message on the answering machine saying Brian had died. I fell while coming down the ladder, jumped in my truck and headed for the office. After several phone calls with police and fire professionals and various community leaders, I wrote the story, helped Raquel finish the newspaper, and then went outside to the back of the building and cried.

Not all the memories and emotions I’m feeling today have to do with work. I’ll forever be grateful to Ken Kamps, John Mahon and Randy Sutter for introducing me to Jesus Christ. I’m grateful to the folks at Mingus Union High School for allowing me to be a volunteer track and cross country coach for all these years. I’m especially grateful for all the kids I’ve coached who left the program equipped with a full understanding that adversity is their best friend. I’m grateful for the years of volunteer service I’ve able to share with Verde Valley Leadership and Manzanita Outreach/Kids Against Hunger.

Most of all, I’m grateful I landed in the Verde Valley. This place is home. I wouldn’t trade it for any other place in the world.

With that said, this is it folks.