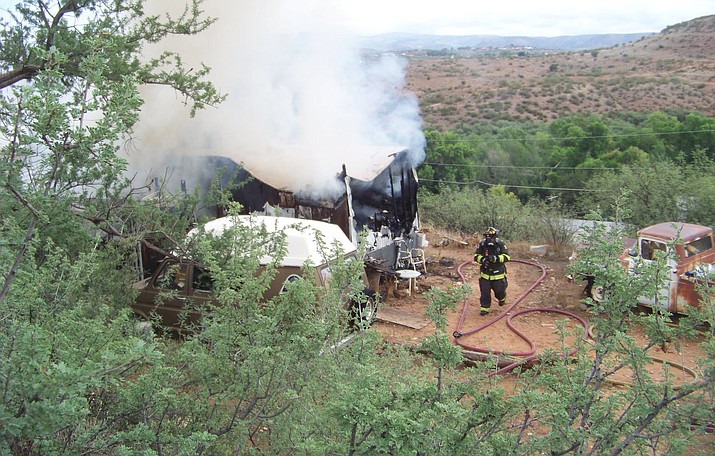 Verde Valley Fire District personnel were called to a house fire about 10 a.m. Saturday, July 24, 2021, at South Kadamoto Drive in Cornville. Fire officials discovered a body within the rubble, and the Yavapai County Sheriff’s Office has taken over the investigation. (Vyto Starinskas/Independent)

One person was killed in a weekend house fire in Cornville as authorities were investigating what caused the blaze well into Tuesday.

Verde Valley Fire District personnel were called to the fire at about 10 a.m. Saturday, July 24, at South Kadamoto Drive in Cornville.

“Smoke was visible to responding units as soon as they were on Cornville Road,” according to a statement from VVFD Fire Chief Danny Johnson. “Upon arrival, crews had heavy fire and smoke coming from the structure. Crews made an interior attack on the fire and were met with heavy fire, smoke and heat. Crews were unable to clear the structure due to the conditions and withdrew to a defensive position to protect surrounding structures.”

Once the fire was under control, Johnson explained, crews discovered the body.

YCSO spokesperson Kristin Greene told The Verde Independent on Monday, July 26, that the house fire in Cornville was labeled a crime scene because the cause of the fire was unknown.

“We don’t know how it started and houses don’t spontaneously combust, they need to investigate and they’re still investigating,” Greene said Monday.

Watch The Verde Independent and VerdeNews.com for updates.