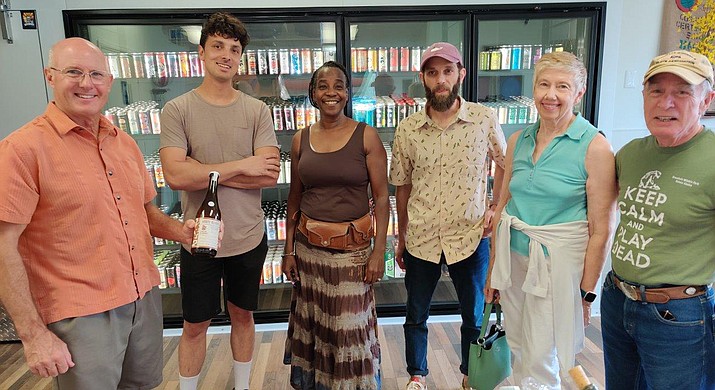 At the grand opening of JesseLee's are Jack Ross, Timo Geis, Camilla Ross, owner Brian Krane, and Marilyn and Vic Lasala. Photo by The Dunnery

The sandwich board stating “JesseLee’s” near the entrance to Castle Rock Plaza piqued our interest.

We stopped in just days after Brian Krane opened his store. Besides a hearty welcome from soft spoken Brian, we noticed a nicely appointed shop with coolers holding at least 60 brands of craft beers, ciders, meads, and “natural” wine plus cool shirts and tees by State Forty Eight and bags of sustainably grown bean coffee.

Brian said he is using the experience he gained in Phoenix while working with local businesses at The Churchill, the shipping container market on 1st Street.

His dream for Sedona and the VOC is to curate the best and most unique rotating selection of the stated beverages by hosting tastings, pop-up events featuring artists and supporting other complimentary sustainable industries.

Since our interest is mostly wine, we arranged to be at his opening event, tasting summer wines hosted by sommelier Timo Geis.

Our friends Camilla and Jack Ross joined us, and other friends, Marilyn and Vic Lasala strolled in. This was not Vic’s first visit as he explained he and his son-in-law had previously investigated and purchased some of the beers.

Timo educated us about four wines, a couple distinguished by the name “orange”, due to the slight color given off by the grape skins during crush or punch down.

The definition of natural means many things to winemakers. In this instance, Timo said it first meant no added sulfites.

Then it had to do with the acquisition of natural yeast from the grapes, themselves. Other sustainable practices during growing, harvesting, and bottling were important too.

Our palates were challenged by the Bergkloster Riesling, the Moscato and the naturally effervescent Monte Olivet. Timo told us we might find those wines more beer-like or cider-like.

We did like and purchased the Sauvignon Blanc from Mendocino County. The Rosses bought that wine along with a bottled beer, The Lost Abbey’s Lost and Found, made in San Marcos, CA and a package of Prickly Pear Blend coffee beans, roasted by Provision in Phoenix. We look forward to other tasting events, especially those featuring red wines or coffees.

JesseLee’s is in the back of the plaza and easily accessed from the alley behind the shops, near the sheriff’s office.

Hours are Wed-Mon 10 a.m. to 6 p.m. Check out Jesseleescraftbeer.com or call 928 284-2809. We wish Brian good health and business and thank him, Timo and our friends, the Rosses and Lasalas for being a part of our “investigation”.

-Jeff and Suzie at the Dunnery

Our quest for Chicago Style Deep-Dish Pizza is complete. We have been waiting since early June for a new deck oven to arrive at Vino di Sedona, 2575 ST 89A in W. Sedona. Wes and Rebecca called us as soon as the oven was installed.

We called 928 554-4682 and let them know the day and time we would like a pizza made for us. We arrived early, sipped on some fine wine, picked up the pizza, and because all this happened during “happy hour” both our beverages and pizza were discounted.