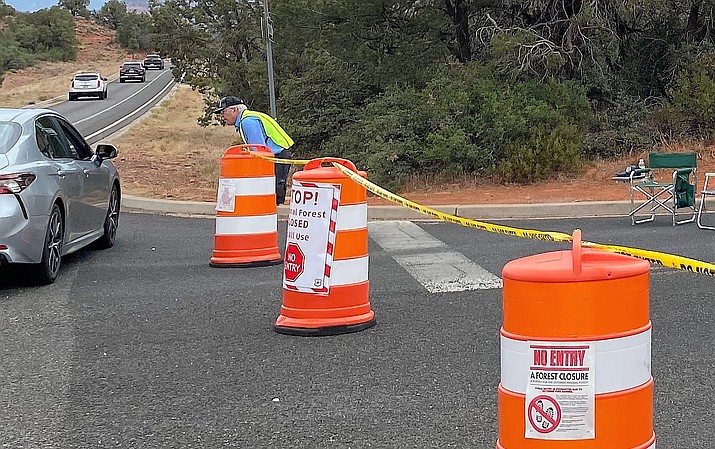 Ray LaPorte speaks to a visitor at the Courthouse Butte Trailhead closure. Photo by Adrienne Pichette

Partnerships serve a critical role in public safety and forest protection on the Red Rock District. On June 23, the Coconino National Forest was closed to visitor access, affecting almost 2 million acres of forest land in Northern Arizona, including 550,000 acres of Red Rock Country in and around the Sedona/VOC communities.

The Forest Service made the difficult decision to close the forest in response to the prolonged wildfire danger throughout Arizona; the lack of available fire-fighting crews because those crews were already tied up battling major wildfires in the local region; and the fire risk associated with a surge of tourist visitors over the July 4 holiday period.

The Prescott and Kaibab national forests were also closed shortly after the Coconino.

During a full forest closure, the public is prohibited from entering any part of the National Forest at any time.  This means no hiking, biking, camping, or vehicle entry.

For the Sedona area this presents a public information challenge, as thousands of tourists and residents seek daily access to local forest trails.

Almost immediately, an army of local volunteers stepped up to help the Forest Service staff the entrance barriers at popular trailheads including Bell Rock, Courthouse, Little Horse and Yavapai Vista.

The volunteers provided critical information to visitors, most of whom had no inkling of the emergency or forest closure.

The Forest Service staff, stretched thin by responding to two local wildfires, depended on the immediate and extensive deployment of the trail-monitor volunteers.

During the closure, Forest Service personnel, as well as officers of the Yavapai County Sheriff’s Department stopped by the trailheads frequently to update the volunteers and to thank them.

One of the local organizations providing volunteer support was the Sedona Westerners Hiking Club.

For the Sedona Westerners, the volunteer effort was organized by Michael Henry, who serves as the club’s “Ranger” (Forest Service liaison).

The Sedona Westerners deployed over 40 volunteer monitors to the closed trailheads, even including some robust octogenarians.

At the closed trailheads, the volunteers had many encounters with hikers, both visitors and local, who had planned to hike the trails.

The local hikers knew of the forest closure but thought they might be able to sneak in a hike anyway.  Many tourists visiting from other regions of the United States as well as from other countries, however, had no idea why the forest and its trails were closed.

Most of these visitors were truly taken aback as the volunteers explained how the State had been in a severe drought for two years, making for an extreme fire hazard, and that a major wildfire of over 70,000 acres was burning in the forest less than 10 miles from where they were standing (the Rafael Fire).

Volunteer Dave Minott, while explaining the closure to an amiable, visiting hiker from Paris, got to practice his French learned in high school 50 years ago.  He also had to turn away an engaging family from Australia; however, those folks were very understanding, as Aussies are no strangers to wildfire catastrophe.

In turning hikers away at the trailheads, the question the volunteers heard most frequently besides “Why are the trails closed?,” was, “Is there anywhere I can hike?”

Volunteers steered many visitors to hike at the Grand Canyon, which remained open.  For those who had never visited the Grand Canyon, taking an unplanned hike in that breath-taking chasm would blunt the disappointment over being barred from hiking in the Sedona area.

Volunteers were also able to steer visitors to hike in Red Rock State Park, which was open, and to visit local archaeological sites such as Montezuma’s Castle.

While almost all hikers turned away by the volunteers at the trailheads were understanding and cooperative, there were exceptions.

The Forest Service found that at some locations, as soon as the volunteers left their posts late in the afternoon, an “all clear” was posted on social media, and hikers began passing through the trailhead closure barriers to do early evening hikes on the closed trails.

Noting this, volunteer, Amanda Maxwell, returned to her duty post at the Bell Rock parking lot after the normal late afternoon quitting time and found about 30 hikers, well beyond the closure barriers.  She told them she was going to report them to Forest Service law enforcement.  As she made the call, all those errant hikers quickly exited the forest.

In response to Amanda’s call, law enforcement then arrived full-force on the scene in two Forest Service vehicles and a Yavapai County Sheriff’s cruiser, sending a clear message to anyone defying the closure order – you are making a big mistake.

But the incident was not over yet.  Amanda described one of the enforcement officers confronting a young man who had just emerged from an illegal hike on the trails.  The young man planted a smug look on his face during the confrontation.

The officer sternly reminded the young man that the trails were closed.  But the young man remained arrogantly dismissive.  With that, the officer issued him a citation to appear in Federal court and face up to a $5,000 fine.

The smug look was suddenly gone and the young man departed in quiet apprehension. Volunteers found such closure scofflaws to be the rare exception, as most residents and visitors appreciated the emergency situation and respected the closure.

When the Forest Service decided it was time to lift the forest closure on July 6, several Sedona Westerners volunteered to assemble at the crack of dawn with their own trucks and assisted in rapidly removing the closure barriers from the trailheads.

• Friends of the Forest Sedona: friendsoftheforestsedona.org/