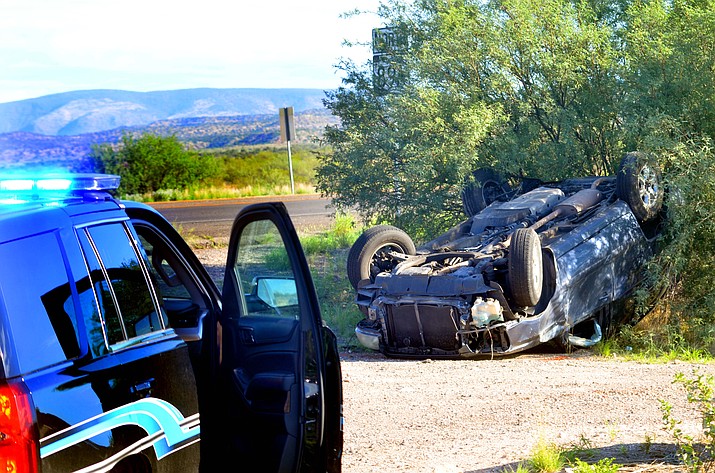 An SUV lies on its roof after a suspected hit-and-run caused the rollover accident near the intersection of Cornville Road and State Route 89A around 7:30 a.m. Friday, July 30, 2021. 730 a.m. (Vyto Starinskas/Independent)

EDITOR'S NOTE: Details on the victim, and suspect added.

COTTONWOOD — A rollover accident at the intersection of Cornville Road and State Route 89A was deemed a suspected hit-and-run, according to Cottonwood Police Department spokesperson Chad Sinn on Friday.

“There is limited information at this point due to the fact that they are still actively searching for the suspect,” Sinn said in an email to The Verde Independent.

Officers responded to the scene at approximately 7:13 a.m. Friday, July 30, and found a 36-year-old Cornville woman in the upside down vehicle.

The woman was transported to Verde Valley Medical Center for unknown injuries after her SUV came to a stop on its roof a few dozen feet from the road after allegedly being hit by another vehicle.

That vehicle was described as a green Chevrolet Blazer, according to Cottonwood PD. "The Blazer struck the woman's SUV and caused it to roll several times," Cottonwood PD said.

According to Cottonwood PD, the suspect continued down Cornville Road where witnesses followed to S. Aspess Road in Cornville. The suspect reportedly abandoned the vehicle and fled on foot.

“The suspect’s vehicle was located but he fled,” Sinn said. “[We] are actively searching for the suspect at this time.”

The woman was later released from VVMC, Sinn added.

If you have any information about this rollover accident, please call Cottonwood PD at 928-634-4246. Those with information can also call Yavapai Silent Witness at 800-932-3232 or submit a tip at yavapaisw.com. Remember, all tips are always anonymous, you never have to give your name.

Watch The Verde Independent and VerdeNews.com for more.