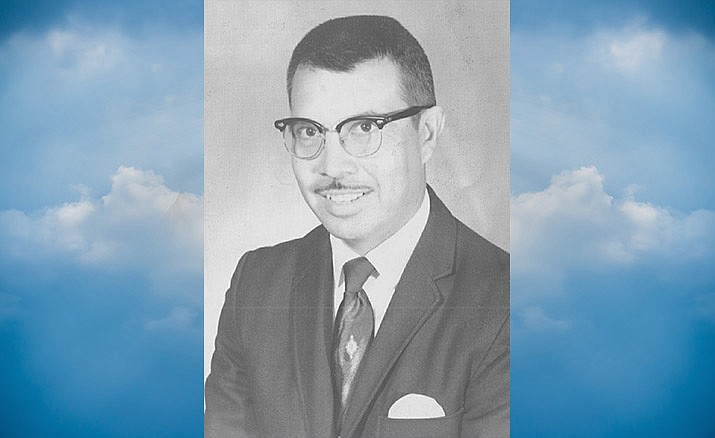 Justino (Tino) Y. Encisco passed into the loving arms of his Lord and Savior on May 26, 2021. He was born July 14, 1934 to Emmanuel and Carmen Encisco in Flagstaff, Arizona.

Tino grew up in Flagstaff, attending local schools. He attended Arizona College (NAU) studying music and education, graduating in 1958. After his graduation, he married his best friend and wife – Sanaida (Sandy) – in July 1958.

He continued his education, eventually earning a masters degree as well. Tino’s initial move to the Verde Valley was to Camp Verde where he taught music.

The couple moved to Cottonwood in December, 1960 and Tino began teaching at Cottonwood Oak Creek School. There, he taught in various capacities for over 29 years, retiring in 1989.

One of Tino’s unique talents was his ability to recall his students’ names and faces decades after they had been in his class. He would often recognize his former students when he saw them in the post office or store. He loved watching the students he taught learn, advance and grow into members of the community.

Tino was an accomplished musician playing clarinet and saxophone in a number of bands and groups over the years. He knew countless songs by heart, and could ad lib if someone sang or hummed the melody to a song they wished to hear. He would often change keys on the fly to accommodate other members of the band.

In recent years he lent his talents by playing music from the 50’s, 60’s, 70’s and more for the residents of nursing homes throughout the Verde Valley.


Tino was active within Cottonwood’s community. He was a member of Immaculate Conception Catholic Church. He was generous with his time and resources, helping others in so many ways. This included helping retirees or widows with care of their homes and property, helping people move, whatever they needed, he went out of his way to help.

Finally, he never met a stranger, he was able to connect and make friends with people wherever he went.

Tino and Sandy were married for 62 years and raised five children. After raising their own, they were active in raising their twelve grandchildren and ten great-grandchildren. Tino loved each one with all of his heart, and was proud of them all, often sharing news of their accomplishments with others.

Tino is preceded in death by his wife, Sanaida Encisco; his parents, and his younger brother, Emmanuel Encisco Jr.

He is survived by his children, Gina Holt of Phoenix, Christine (Benny) Soliz of Cottonwood, John (Trudy) Encisco of Marietta, GA, Andrew Encisco (Raymond Nader, Jr.) of Phoenix and Loretta (Mike – deceased) Sims of Clarkdale; his grandchildren and great-grandchildren.

He is also survived by his brother, Alfred (Dollie) Encisco and sisters, Dolores Humlie and Rebecca Ruiz.

Tino will be truly missed by all who knew and loved him so very much. Remembrance services will be held at Immaculate Conception Catholic Church, 700 N. Bill Gray Road in Cottonwood as follows: Visitation will be held Sunday, June 13th at 4:00 pm with the Rosary to follow at 5:00 pm. Mass will be held Monday, June 14th at 11:00 a.m. The Graveside Service will follow the Mass at All Souls Cemetery in Cottonwood. An online guestbook is available to sign at www.westcottfuneralhome.com