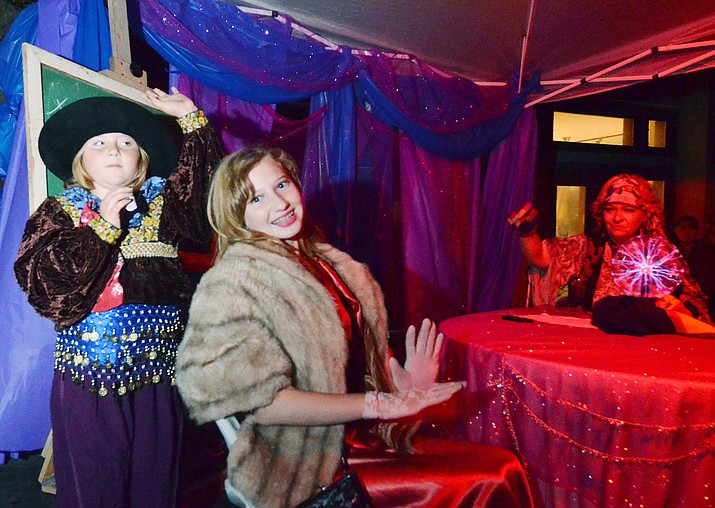 Jerome resident Carol Anne Teague reads the fortune of her granddaughter, Tyler Teague, center, while Harlequin Teague, also her granddaughter, assists. Fortune telling is one of the many aspects of Jerome as a ghost town. VVN/Vyto Starinskas

“Would you like to know what that girl has been thinking about you?” she asks? You stop, you think, you nod in the affirmative with the hint of a smile. You say ‘yes,’ not by words but by your actions. The gypsy fortune teller has piqued your interest, so you walk to her and let her read your fortune.

Teague reads your palm. She says, almost as if she’s posing a question but more so you’ll open up, “You’ve had an interesting life ... what happened when you were 13? Did you have a visitation?”

Through the powers of engagement, Teague learns a little something about the person whose fortune she will tell.

“Mom, aunt, grandma, sister. You’ve definitely got someone on the other side,” Teague said. “Someone desperately wants to tell you something.”

A series of conclusions and guesses steers Teague’s dialog and allows her to read your fortune.

Is there something psychic about Teague reading one’s fortune?

“Quite possibly,” she said. “People do have someone behind them who is trying to say something.”

Before the pandemic, Teague participated in the annual Jerome Ghost Walk, a fundraiser for the town’s historical society. Not always as a fortune teller. Some years, the Jerome resident would play a baseball player, hooker, madam, miner or nurse – all having returned to their former life on the sunny side of the soil.

Jay Kinsella, general manager of the Jerome Historical Society, said that the society’s board recently decided to cancel this year’s event. Last year’s event was also canceled due to the pandemic.

Once upon a time, Jerome was a billion dollar mining camp – and the second largest city in Arizona.

Fast forward to the 1950s with the mile-high hilltop town’s mines closed – and the town’s population having plummeted from its heyday of more than 15,000 to less than 100.

Jerome indeed became a ghost town. But was it really haunted? Suppose it depends on who you ask.

Today, Jerome is a bustling artists’ community with a population of close to 450. According to Kinsella, talk of ghosts started in the 1950s as a marketing strategy to revitalize the community.

“In 1953 the Jerome Historical Society was established,” Kinsella said recently. “Recognized as the largest ghost town in 1954, Jerome was then advertised as a ghost town. Nowadays, they call it branding,”

Nowadays, there’s more than a few ghost tours to be had in Jerome, and plenty of ghost stories to tell.

Formerly the United Verde Hospital (1926–1950), the Jerome Grand Hotel is known by some as the most haunted place in town. In the book “Haunted Jerome,” authors Patricia Jacobson and Midge Steuber state that in addition to the patients who died at United Verde Hospital from mining accidents and illnesses, “several suicides and a possible murder also occurred in the infamous building.”

Known in the affectionate as Spook Hall, the town’s old J.C. Penney building is home to the annual Jerome Halloween Ball. After 45 consecutive Halloween balls at Spook Hall, COVID-19 forced the event to take the year off in 2020.

As the story goes, The Mile High Inn, built in 1899, is the home of a phantom cat that leaves its footprints on the hotel’s beds.

Here are the websites of some regular Jerome ghost tours: