Kick back and enjoy kayak trip down Verde River 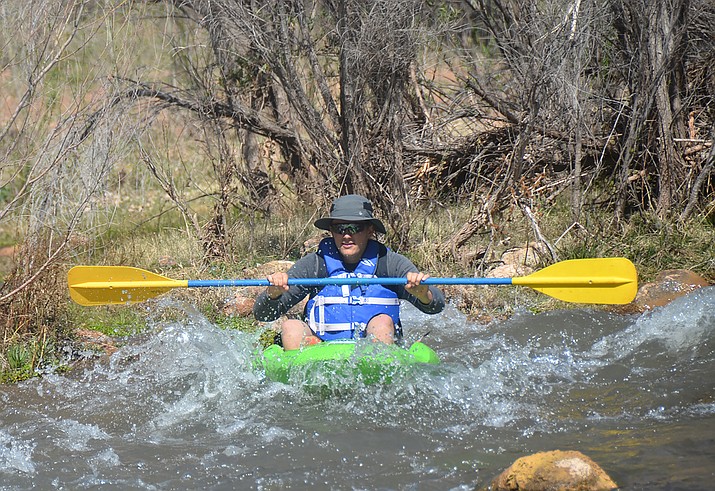 The Town of Clarkdale has set up a fabulous kayak run on the Verde River, which flows along Sycamore Canyon Road. This section is perfect for beginners to get their feet wet, and for experienced kayakers to have fun and show off their skills. VVN/Vyto Starinskas

Kayaks on top of a car roof-rack have become a common sight in the Verde Valley.

But how do you become one of those kayakers that you envy who are heading towards the Verde River on a hot summer day?

If you have never kayaked, it might be smart to get a kayak guide.

If you are an experienced kayaker, the Verde River has lots many points of entry, but you have to find them.

The Town of Clarkdale has set up a fabulous kayak run on the Verde River, which flows along Sycamore Canyon Road. This section is perfect for beginners to get their feet wet, and for experienced kayakers to have fun and show off their skills.

This three-mile run is sandwiched by two parking lots, one at the Lower TAPCO River Access Point and one at the Tuzigoot Bridge.

The TAPCO-to-Tuzigoot run is also supported by several kayak companies where you can get a kayak-guide or rent a self-guided kayak tour.

Of course, you don’t have to kayak this stretch of Verde River and there are many entry points north toward Sycamore Creek and south toward Camp Verde. Kayakers with their own boats and put in any number of locations up and down the river

The Verde River Institute has maps to find those entry-points, explained the Verde Institute’s Doug Von Gausig, a former mayor of Clarkdale.

How to get into kayaking

How a person approaches kayaking on the Verde River depends on the level of their experience, Von Gausig said.

“If you’re a beginner, and you’ve never kayaked before, or you’ve never been out on a river in a kayak,” Von Gausig said, “you might choose one of the paid outfitters to take you out and show you this stretch right here on the Verde River from TAPCO down to Tuzigoot.”

That would give a person an idea if they liked it and if they were up for any of the dangers.

“They are going to learn how to maneuver a boat, how to get through a rapid, how to put on a personal flotation device.”

Brandy Walker, one of the owners of Outdoor Adventure Centers in Cottonwood, said they do guide and self-guided tours.

“We do all the shuttling and carrying all the equipment on and off the river,” she said. “And you are free to float on your own.”

“We always suggest a guided-tour first because we have Class 2 rapids,” Walker said. The guides make sure they get you through the rapids.

Outdoor Adventures only runs kayak tours on the Clarkdale TAPCO stretch of the Verde River and does not do kayak rentals aside from the tours.

This is the seventh year she and her husband Craig have been doing kayak tours on the Clarkdale stretch. She said they did about 2,000 tours last year.

After a guided tour, if people like it, they can purchase an entry-level kayak at Costco or Walmart, Von Gausig said. They won’t last forever on the Verde River.

People will have about $500 or $600 into it by that time including paddle, flotation device and water bottles.

The Verde River Institute has all the river maps that were ever produced, Von Gausig said. He said he did a master-map that shows every river put-in, every take-out, river miles to each location, every hazard that he knew about.

The farthest people would kayak on the Verde River would be north of the TAPCO run at the confluence with Sycamore Creek and the Verde River, Von Gausig said.

There are several put-in points driving out toward Sycamore Creek, but they may require a four-wheel drive vehicle.

South of the TAPCO river section and south of Cottonwood there are put-ins like at Prairie Lane, Black Canyon, Thousand Trails, White Bridge, Clear Creek and Beasley Flat.

The Verde River Institute can be found at verderiverinstitute.org.