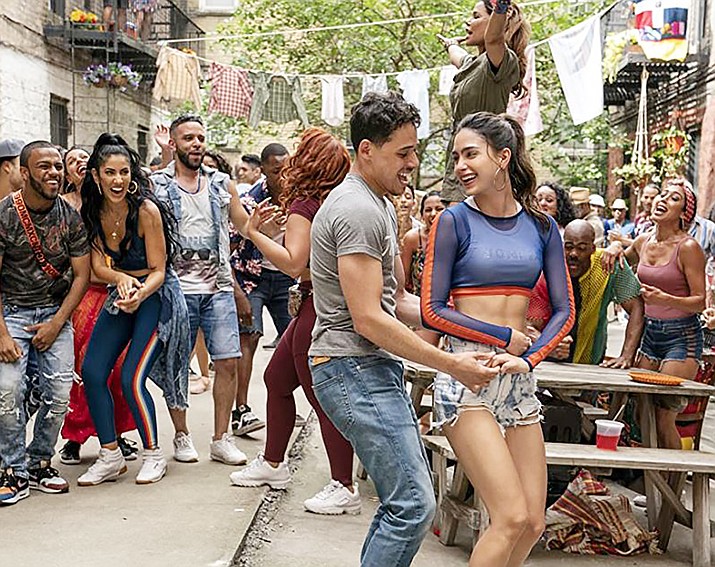 "In the Heights" centers on a variety of characters living in the neighborhood of Washington Heights, on the northern tip of Manhattan and what it means to be home.

Here are a few of the latest movies to be released.

In the Heights centers on a variety of characters living in the neighborhood of Washington Heights, on the northern tip of Manhattan. At the center of the show is Usnavi, a bodega owner who looks after the aging Cuban lady next door, pines for the gorgeous girl working in the neighboring beauty salon and dreams of winning the lottery and escaping to the shores of his native Dominican Republic. Meanwhile, Nina, a childhood friend of Usnavi’s, has returned to the neighborhood from her first year at college with surprising news for her parents, who have spent their life savings on building a better life for their daughter. Ultimately, Usnavi and the residents of the close-knit neighborhood get a dose of what it means to be home.

Rated PG-13 for some language and suggestive references.

While her house undergoes repairs, fiercely independent senior Helen moves into a nearby retirement community - just temporarily. Once inside the Pine Grove Senior Community, she encounters lusty widows, cutthroat bridge tournaments and a hotbed of bullying “mean girls” the likes of which she hasn’t encountered since high school, all of which leaves her yearning for the solitude of her home. But somewhere between flower arranging and water aerobics, Helen discovers that it’s never too late to make new friends and perhaps even find a new love.

Rated PG-13 for drug use, suggestive material and some language

Even a federal maximum-security prison can’t hold Richard Pace (Pierce Brosnan), a brilliant international thief. But his daring escape and high-octane car chase, eluding the FBI and police, ends with him being scooped up by The Misfits, a band of modern-day Robin Hoods. The skilled group convinces Pace to join them to pull off the heist of the century: stealing millions in gold bars kept under one of the most secure prisons on earth, owned by rogue businessman Schultz (Tim Roth), and used for funding terrorist groups worldwide. Aside from the money, Pace wants revenge against Schultz, the man behind his incarceration.

Rated R for some language/sexual references and brief drug use.

Israeli director Eytan Fox, who landed on the map with his 2002 gay military romance Yossi & Jagger, brings sensitivity, restraint and slow-burn sensuality to a story of cross-generational emotional awakening in Sublet. John Benjamin Hickey’s Michael, a New York Times travel writer whose column aims to discover as much as possible about his destination in just five days, finds Tel Aviv to be “full of contradictions, chaotic and intense, but at the same time completely laid-back.” It’s not a subtle point that he’s also describing the younger man with whom he has formed a surprising bond, though that doesn’t hurt this well-acted, contemplative melodrama.