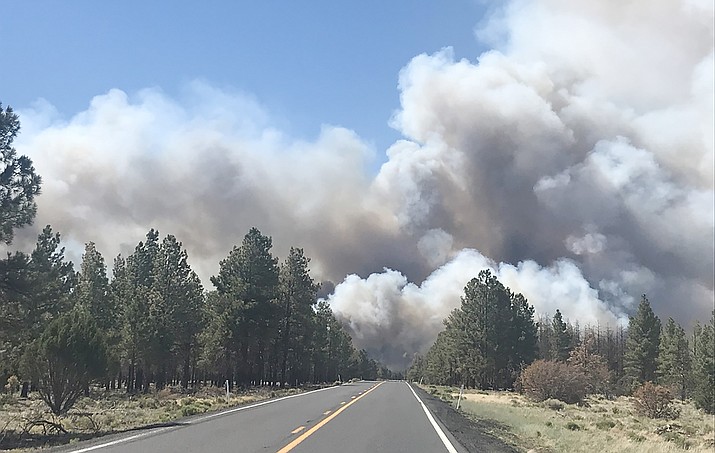 The Slate Fire had only burned about 100 acres as of Monday night, but the fire has closed the highway leading from Flagstaff to the South Rim of the Grand Canyon and was burning only 23 miles from Flagstaff. A handful of other fires were raging around the state as of Tuesday morning. Courtesy of Arizona DOT

A handful of fires burning close to populated areas and/or major highways had officials on edge this week.

The Slate Fire, which began early Monday morning, is the main fire that might be visible from the Verde Valley or along I-17, according to the U.S. Forest Service. It started about 23 miles northwest of Flagstaff on the west side of U.S. 180 and grew to roughly 100 acres Monday.

Portions of U.S. 180 — the main route between Flagstaff and the South Rim of the Grand Canyon — was closed throughout Monday and into the evening. Responders worked to contain the fire and conduct burnout operations; containment data had not been established yet.

About 100 personnel — including three hot shot crews, six engines, a helicopter, a water tender and a dozer — were on-scene Monday. Motorists should avoid Highway 180 north of Kendrick Park, and visitors to the Grand Canyon National Park should use Highway 64 from Williams in order to access the entrance to the Park.

No structures were threatened.

The fire was called in by a Coconino County Sheriff’s Officer at 3 a.m. Monday.

The main two fires burning in Arizona on Tuesday were the Mescal and Telegraph fires. Both had burned more than 50,000 acres in mountainous areas east of Phoenix and northeast of Tucson, and had impacts of air quality in both cities.

The Mescal Fire was only 8% contained as of Tuesday morning. It has burned about 52,000 acres and is centered about 12 miles east of Globe. Firefighters mad progress Monday — especially in keeping the fire from reaching U.S. 70. There are 672 firefighters assigned to the blaze.

U.S. 70 is only allowing light traffic, and no semi-trucks. Road closures include U.S. between Superior and Top-of-the-World and several state highways in that same area.

Not far from the Mescal blaze is the Telegraph Fire, burning less than one mile from Top-of-the-World. Having burned 61,000 acres already — much of that within Tonto National Forest — the Telegraph Fire began Friday afternoon; no containment data was available Tuesday.

Firefighters have a goal of keeping the fire south of U.S. 60 and protecting public and private property. The fast-moving and dynamic fire led the Red Cross to set up an evacuation center at High Desert Middle School in Globe and at Skyline High School in Mesa.

Large animal sheltering is currently available at the Birch Stockyard in Globe and the Apache Junction Rodeo grounds. The Pinal County Sherriff’s Office promised evacuation updates on its Facebook page.

There are a handful of other wildfires burning in Arizona that are at or near containment and/or are in remote areas. One such blaze is the Flag Fire, near Kingman, which was 100% contained Monday, having burned almost 1,300 acres.