'UFO' floating over Prescott was a NASA research balloon 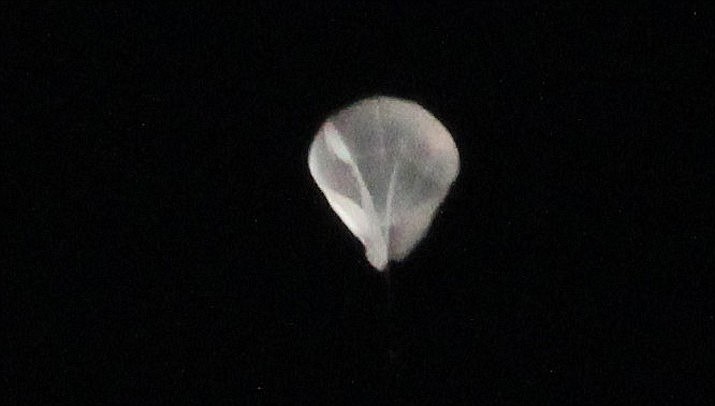 What area residents were seeing in the sky over Prescott on Tuesday night, June 8, 2021, was a high altitude research balloon launched from NASA's Columbia Scientific Balloon Facility in Ft. Sumner, New Mexico. It drifted west over Arizona and descended and touched down northeast of Chino Valley, Arizona. (Brian Haddad, for the Courier)

From Oak Creek Canyon to Cottonwood and throughout the state, residents reported seeing a bright, round object floating in the sky Tuesday evening.

"Through binoculars it appeared to be some sort of balloon," Cynthia Loucks told the Prescott Daily Courier in an online message.

Initially, many skywatchers speculated it was a weather ballon. But the National Weather Service confirmed that what residents were seeing was actually a large research balloon launched from NASA's Columbia Scientific Balloon Facility in Ft. Sumner, New Mexico.

Ina a Tuesday night Facebook photo post, the National Weather Service explained, "Did you see this in the sky tonight and think it was our weather balloon? We saw it too and can confirm it's not one of our weather balloons. In fact, it appears to be one in a fleet of NASA research balloons."

In another tweet, a NWS official explained that the ballon spotted over Arizona was an "entirely different type of balloon than what the NWS uses. Those research balloons go high above the troposphere," which is the lowest region of the atmosphere.

On Wednesday morning, June 9, NASA confirmed the balloon was theirs. It was carrying what they called the "Balloon Observation of Microburst Scales," or BOOMS and BALloon-Based Observations for sunlit Aurora, or BALBOA.

According to a Wednesday morning post on nasa.gov, the flight lasted 15 hours and floated to an altitude of 117,300 feet, but drifted west over Arizona. "The balloon descended and touched down northeast of Chino Valley, Arizona, on June 9 at 12:54 a.m. EDT / June 8 at 10:54 p.m. MST," NASA wrote.

The balloons often endure temperatures as cold as -139°F (-95°C), relative humidities from 0% to 100%, air pressures only a few thousandths of what is found on the Earth's surface, ice, rain, thunderstorms, and wind speeds of almost 200 mph, the NWS explains on their website.

As of this report, it is not yet known if NASA's ballon was recovered after it came down northeast of Chino Valley.