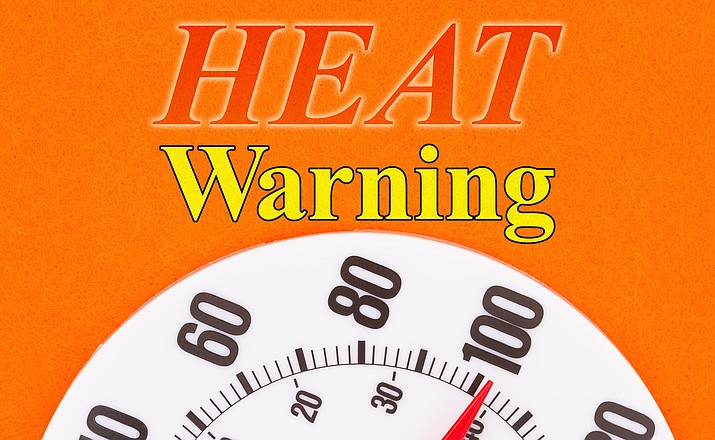 PHOENIX – Triple-digit temperatures are returning with a vengeance, prompting the National Weather Service to issue this year’s first excessive heat watch, in effect all next week for most of central and southern Arizona. Temperatures are expected to top 110 each day, reaching 116 on Tuesday and Wednesday.

In addition, Arizonans can expect higher than normal temperatures this summer, meteorologists say, although not as bad as 2020.

“An excessive heat watch is issued whenever temperatures are at levels that are, first of all, relatively unusual, maybe near records, but more importantly levels that can impact the health of folks, especially for the folks that are going to be outside,” said Marvin Percha, a meteorologist for the National Weather Service in Phoenix.

Temperatures are typically 101 to 102 degrees this time of year, he said.

As temperatures rise, so do health and safety concerns in the state.

The weather service uses a color-coded system to warn the public about how dangerous specific temperatures can be for health concerns: Green means no risk; yellow means little to no risk; orange is moderate, meaning there is risk to those who are sensitive to heat; red and purple are high and very high, respectively, meaning there is risk to most people and risk to everyone. When an excessive heat watch warning is issued, it typically deals with red and purple levels.

“So right now if we’re looking at temperatures that forecast to be well above 110, that certainly brings much greater impact in terms of heat risk to the population,” Percha said.

In the past decade, Maricopa County’s public health department alone has reported more than 3,000 heat-related deaths, with 2020 reaching a record high of 323 deaths. One heat-related death has been confirmed this year, health officials said.

Percha said the best ways to stay safe are to make sure your home air-conditioning unit is working properly, drink plenty of water and, if you need to be outside, do so early in the morning or later in the evening when temperatures aren’t quite as high.

If you must be outside during peak sun, Dr. Kevin Foster, director of the Arizona Burn Center, warns against getting burned by hot pavement.

“If you look at hot pavement or asphalt at 2 o’clock in the afternoon, in direct sunlight, the temperature is usually somewhere around 170 to 180 degrees Fahrenheit, which is a few degrees shy of boiling,” Foster said. “So it doesn’t take any time at all to get a third degree burn.”

Foster said other routine habits and activities like getting into your car, kids playing on a playground or simply opening a door to a store or business can cause burns.

“One of the things that people don’t think about very often is when you walk up to a door that’s in the sunlight, especially a door where the handle might be metal, that handle might be 170, 180 degrees,” he said. “If you grab onto that and pull on it, that may cause a pretty serious burn.”

In hopes of beating the heat, Glendale offers heat relief stations, where community members can escape the high temperatures and grab a drink of water. The program is directed by the Maricopa Association of Governments, with stations at Glendale Memorial Parks Cemetery, all four of Glendale’s public libraries and other city buildings.

Perfecta Weeden, a lieutenant for the Salvation Army in Glendale, said these stations offer help to many people who work outdoors, are homeless or who ride a bike or walk as their main way of traveling.

“We try to be a safe haven for people to come to to receive that kind of support so they can recuperate and go on to their next journey,” she said.

The Salvation Army’s relief station provides other necessities, such as sunblock, hand sanitizer and face masks, and offers help to individuals in any way they can, Weeden said.

“We try to serve the whole person,” she said. “Whether it be mentally, emotionally, physically, spiritually, we even take the time to pray with them if that’s what’s needed as well.”

Percha said the NWS Climate Prediction Center projects high temperatures all summer long, but it likely won’t be another record year for heat.

“It’s definitely going to be warmer than normal, so folks are going to have to be prepared for more of these very hot conditions.”