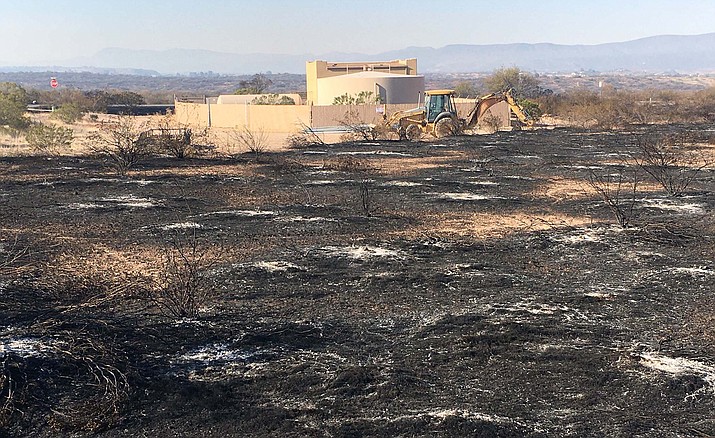 Monday, a backhoe was seen at this charred area northeast of Cornville. There was much less smoke visible at the 1200-acre fire Monday than there had been in the fire’s initial stages Sunday. VVN/Vyto Starinskas

CORNVILLE - The size of the Cornville wildfire has been reassessed — and all evacuation orders for the area have been lifted.

Monday morning, according to an Inciweb.org report from the Arizona State Department of Forestry and Fire Management, the Cornville Fire is at 1,200 acres, with no mention of containment.

Also Monday, the Yavapai County Sheriff’s Office announced evacuation orders have been lifted, but residents in the area are to remain in “ready” status.

“The eastern flank of the fire remained active overnight, but overall fire activity was minimal,” the Forestry Department said in an Inciweb report Monday. “Last night, the fire moved into House Mountain, just northeast of the community of Cornville, and is currently burning away from populated areas. Firefighters were taken off the west and east sides of the fire Sunday night for safety concerns due to the rugged terrain the fire moved into.”

Only one outbuilding has been destroyed and no other structures have been damaged, the department said.

The report said engines patrolled and monitored established fire lines east of Page Springs Road throughout the night. This morning, crews were back on the fire line and actively engaged on fire suppression efforts.

The fire continues to move to the east/northeast with fire activity expected to increase as temperatures warm up. Extreme temperatures and dry winds, along with rugged terrain will challenge firefighters.

The National Weather Service forecasts Monday’s high temperature in Cornville to be 109 degrees, with 113 forecast for Tuesday. An Excessive Heat Warning extends through Friday evening, and the high is forecast to be at least 108 through Saturday.

The wind isn’t helping. Breezy conditions Sunday seemed to push the fire to the northeast, up into House Mountain. It burned growth on both sides of Lee Pasture Road.

The fire was reported about 12:30 p.m. Sunday. There are 149 personnel assigned to the fire, including engines, water tenders, a hand crew and aircraft.

Track the fire and the evacuation orders here: inciweb.nwcg.gov/incident/7532/

In addition to Sunday’s wildfire, firefighters in the area also had to deal with two other blazes Friday.

At about 5:15 p.m., Verde Valley Fire responded to a call where brush was on fire and threatening a house along Page Springs Road. Crews stopped the forward progress quickly, and with help from Sedona Fire and the U.S. Forest Service, were able to keep the fire from spreading to the house.

Yavapai County Sheriff’s deputies helped with traffic when Page Springs Road was closed during the response.

The fire was limited to about a quarter-acre.

The fire was caused by a tree falling and hitting a power line. APS was dispatched to address the power line and restore power to the house.

Less than an hour later, at about 6 p.m., Verde Valley and Cottonwood firefighters responded to brush on fire off of Bonnaha Avenue in Clarkdale. Crews found brush burning in a wash with moderate rate of spread and were able to stop forward progress quickly.

The fire was contained to less than a half-acre and no structures were threatened.

The fire is under investigation.

Yavapai Apache police assisted with traffic control at the scene.