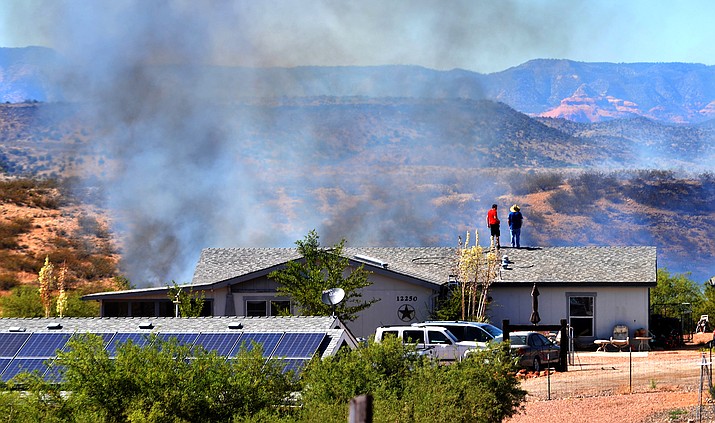 Despite the close proximity to residences, no homes were lost in Sunday’s Cornville wildfire. VVN/Vyto Starinskas

The cause of a fire that charred more than 1,200 acres in Cornville is still under investigation — but no structures have been damaged.

The Cornville Fire began just after noon Sunday, in an area northeast of Cornville Road and Cornville’s main enclave, east of Page Springs Road. The Yavapai County Sheriff’s Office eventually issued a “go” order for several neighborhoods along South Page Springs Road, but allowed residents to return within 24 hours to a “ready” status.

Tuesday morning, according to an Inciweb.org report from the Arizona State Department of Forestry and Fire Management, the Cornville Fire is at 1,241 acres, with zero containment, but forward progress had been stopped. The cause is still under investigation.

In a Tuesday morning news release, Brady Smith of the U.S. Forest Service cleared up what investigators know about how and where the fire started.

“It was mistakenly reported that it originated from a structure on fire on private property,” Smith said. “Investigators have found that the origin of the fire was actually on national forest land and rapidly grew throughout Sunday, encroaching upon private land.”

Monday, the Arizona Department of Forestry Management said Sunday night, the fire moved into House Mountain, just northeast of Cornville, and was burning away from populated areas. The eastern flank of the fire remained active overnight, but overall, fire activity was minimal.

Firefighters were taken off the west and east sides of the fire Sunday night for safety concerns due to the rugged terrain the fire moved into.

Crews dumped more water on the fire Monday, including with the help of a helicopter. Area smoke was much more dispersed Monday than Sunday, with no new large plumes emanating from the main fire.

The fire continues to move to the east/northeast with fire activity expected to increase as temperatures warm up. Extreme temperatures and dry winds, along with rugged terrain will challenge firefighters this week.

An Excessive Heat Warning extends through Friday evening, and the high is forecast to be at least 108 through Saturday.

The wind isn’t helping. Breezy conditions seen when the fire sparked on Sunday seemed to push the fire to the northeast, up into House Mountain. It burned growth on both sides of Lee Pasture Road.

As of Tuesday, there were 149 personnel are assigned to the fire, including engines, water tenders, a hand crew and aircraft.

Residents in the area are encouraged to remained prepared and be ready to evacuate if necessary.

The American Red Cross staffed an evacuation center for the fire in Mingus Union High School’s small gymnasium, best accessed through the school parking lot off of El Camino Real in Cottonwood.

Track the fire and the evacuation orders here: inciweb.nwcg.gov/incident/7532/.