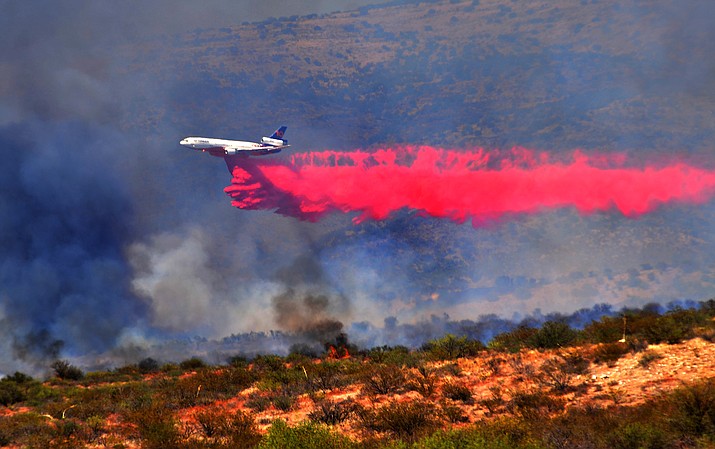 In addition to the 1,200-acre Cornville Fire, there are 15 other active fires in Arizona. VVN/Vyto Starinskas

In addition to the 1,200-acre Cornville Fire, there are 15 other active fires in Arizona.

The closest blaze to the Verde Valley is the Slate Fire, located 23 miles northwest of Flagstaff along both the east and west sides of U.S. Highway 180 in the Coconino National Forest. As of Monday, that blaze was at 11,000 acres and was 16% contained.

Highway 180 has been reopened through the area. However, motorists should proceed with caution and be ready for smoke visibility changes and watch out for crews working in the area.

A forest order was issued Saturday closing parts of the forest located near the fire. Windy and active wildfire conditions, along with burnout operations conducted last week, are the main factors in the growth of the fire, which is moving in a western direction.

Crews continue to secure Cedar Ranch, and several recreation sites in the area remain closed, including the Red Mountain and Slate Mountain trailheads, Kendrick Cabin and a portion of the Arizona Trail from Kelly Tank (mile 603.3) to Cedar Ranch (mile 616.2).

The fire was called in by a Coconino County Sheriff’s deputy early on the morning of June 7 and the cause is still under investigation.

Visitors to the Grand Canyon National Park should use Highway 64 from Williams to access the entrance to the park.

The Kaibab National Forest South Zone Prescribed Fire was set up in early May near the South Rim of the Grand Canyon. It is a 117-acre area.

The Telegraph and Mescal fires continue to burn along the U.S. 60 corridor, east of the Phoenix metro area. The two fires are at 88,000 and 72,000 acres, are among the biggest in the state now, but are much closer to being controlled than only a few days ago.

The Telegraph Fire, burning in the Tonto National Forest, is 74% contained, but it still burning near populated areas. Monday, residents of El Capitan and Beverly joined the thousands of other Arizonans who have evacuated because of the Telegraph Fire.

The blaze began less than a mile from Top-of-the-World. More than 900 people are working that fire.

The Mescal Fire, which started about 12 miles east of Globe, is 88% contained. There are 285 people working on that blaze. State Route 77 is closed in both directions in the area.

The Griffin and Salt fires are located not far from the Telegraph and Mescal blazes. The larger of the two, the Griffin Fire, is 60,000 acres, but is 100% contained.

The McDonald Tank and Boggy Creek fires, burning in the Apache National Forest, are both small and more than 70% contained.

The Pinnacle Fire is burning in the Santa Teresa Mountains, 18 miles south of Bylas. It has charred 10,000 acres, is 0% contained, and has led to evacuations.

The Warren Fire, burning in the Chiricahua Mountains along the New Mexico state line, is only 1,400 acres. It’s 100% contained.

The Sycamore Canyon, Warsaw, Shamrock and Harshaw fires are smaller blazes burning in rugged areas near the Mexican border. All are at least 66% contained.

The Flag Fire, which only burned about 1,300 acres near Kingman, has been 100% contained for more than a week.