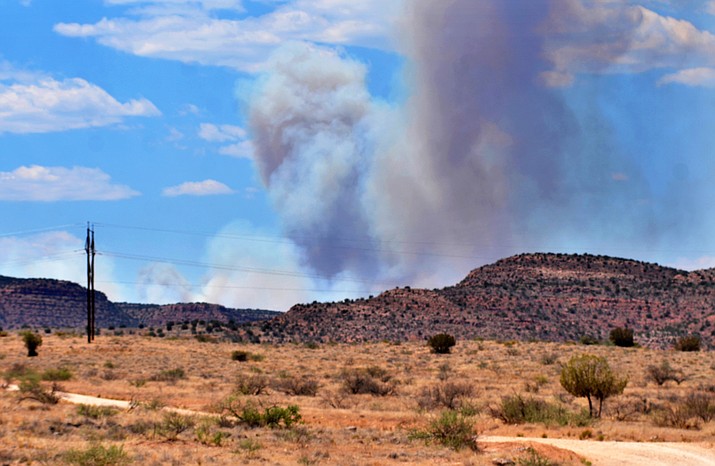 The lightning-ignited Rafael Fire can be seen from Sycamore Canyon Road. It grew significantly Sunday, according to InciWeb website. VVN/Vyto Starinskas

VERDE VALLEY - The lightning-ignited Rafael Fire grew significantly Sunday to 10,000 acres from 400 acres earlier in the day, according to InciWeb website.

Meanwhile, dispersed campers in the area of Sycamore Canyon, Forest Road 535 and Forest Road 231/Woody Mountain Road are being notified to pack up and leave due the fire, according to InciWeb website.

The fire started north of Perkinsville and can be seen from Cottonwood, Sedona and Jerome.

Firefighters are fighting four fires on the Chino Valley Ranger District, according to the Prescott National Forest. All four fires are north of the Verde River.

"The rugged terrain and remote access to the fire perimeter is driving the indirect fire management strategy. Fire managers’ main objective (Sunday) is to prepare roads and trails for potential firing operations tactics," according to news releases from Debbie Maneely of the Prescott National Forest.

"This will allow fire managers to respond to the dynamic environment of fire. The main safety concerns are extreme heat and thunderstorms in the area."