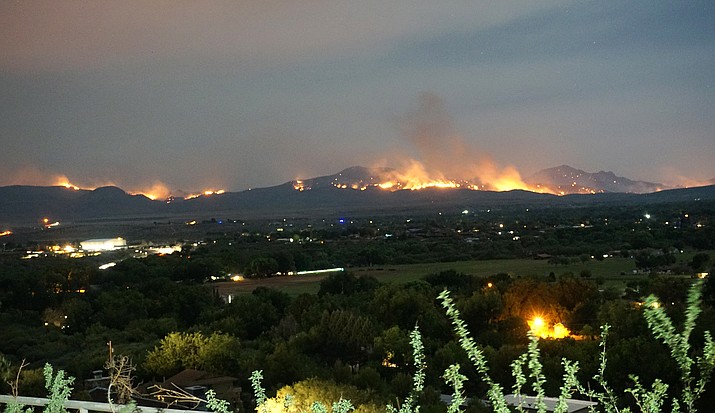 The Backbone Fire, burning in Fossil Creek between Camp Verde and the Pine-Strawberry area, is the largest fire in the Verde Valley at more than 32,000 acres. Photo courtesy Cheyenne Weatherford

VERDE VALLEY — Dry, hot, pre-monsoon conditions have contributed to a series of fires that have surrounded the higher elevations around the edges of the Verde Valley Monday. Stage II fire restrictions remain in place across the region.

The Backbone Fire, burning in Fossil Creek between Camp Verde and the Pine-Strawberry area, is the largest fire in the Verde Valley at more than 32,000 acres. It is zero-percent contained. The cause is under investigation.

The western flank of the fire can be seen — especially at night — sprawling across the rising highlands to the southeast of Camp Verde.

According to a Monday news release from Coconino National Forest, the Backbone Fire is being fought by more than 250 firefighters.

Evacuation orders were issued for the communities of Pine and Strawberry. Residents and visitors should contact their county or visit ein.az.gov/ready-set-go for information regarding evacuation status.

Closures include State Route 260 from Camp Verde to State Route 87. State Route 87 is closed north of Payson to Clint’s Week. Motorists are advised to visit az511.com for current road closures before traveling.

All Tonto, Coconino, and Prescott National Forest lands, roads, and trails in the area of the Backbone Fire are closed. Full details of area and road closures are available on the Backbone Fire Inciweb page: inciweb.nwcg.gov/incident/7545/.

Firefighters continued to monitor the fire progression Sunday night around both the western and eastern flanks of the fire and continued to prepare containment features to support Monday’s operations. Monday, according to the release, firefighters and heavy equipment will reinforce control features to the south and west of Strawberry and Pine and prep for future burnout operations as necessary to strengthen holding features and protect the communities and values at risk.

Aircraft will focus on keeping fire from moving into Deadman Mesa and Hardscrabble Canyon. Another day of extreme fire behavior is expected with growth to the north and east.

Arizona Public Service is working closely with the agencies responding to the Backbone Fire. While the Forest Service doesn’t currently anticipate a disruption in APS service, it’s monitoring the fire’s progress in the event there is a need to take power lines out of service to protect firefighters and/or the fire or smoke impacts to electrical infrastructure.

Customers can visit aps.com/outagecenter for information on how to be prepared for an outage and to view the APS outage map.

Extreme temperatures will continue Monday with single-digit humidity and high temperatures at or slightly above 100 degrees. Scattered dry thunderstorms may develop to the north and west this afternoon and linger into the evening.

Southwest winds will increase with gusts of 20 to 25 mph this afternoon.

The Cornville Fire, which began on June 13, is 100% contained. Its cause is under investigation.

Burning in an area about 20 miles northwest of Uptown Sedona and about 25 miles northeast of Clarkdale is the 20,000-acre Rafael Fire, which was caused by a lightning strike.

It is centered about four miles east of Perkinsville and is burning east of State Route 89. There is no containment. There are 65 firefighters assigned to the blaze.

Garland Prairie is reminded to be in “ready” mode. Visit Coconino County’s Facebook of Twitter pages for more information.

Track this fire at inciweb.nwcg.gov/incident/7567/.

The Rafael Fire is part of a series of five small fires that broke out over the past several days, ignited by a passing thunderstorms north of Paulden and west of State Route 89 in the Prescott National Forest.

The wildfires have been detected and are being managed by the Central West Zone Type 3 Incident Management Team.

The Red Hat Fire, discovered June 17, was 75 acres as of Sunday night. The Limestone Fire was 43 acres; the Spring Fire was 425 acres; the Rock Butte Fire was 144 acres and the Silent Fire was 45 acres.

The residents of Paulden are in “SET” status - which means everyone needs to be ready to evacuate at a moment’s notice.

Other fires near Perkinsville

Sunday afternoon, Prescott National Forest reported three other fires within the Chino Valley Ranger District, east of Highway 89 and north of the Verde River. The Sandflat Fire was at three acres and the Archibald and Hornet fires were about one acre.

There are no evacuations or closures associated with these fires. There are two hotshot crews, one Type 3 Engine and one Type 6 Engine assigned to the fire.