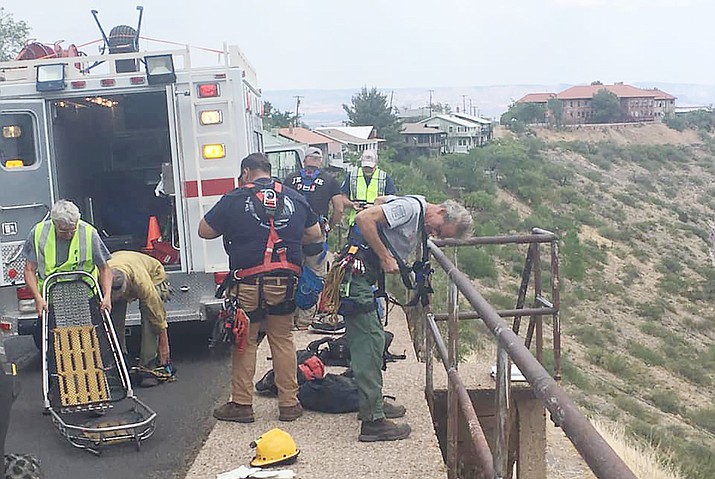 JEROME — First responders recovered a dead body in the Jerome area Tuesday. Police Chief Allen Muma said it appears to be the body of a missing local resident.

About 11:30 a.m. Tuesday, according to Muma, the body of a woman was discovered in Jerome on a steep slope off Highway 89A.

Caroline Denise Guth of Jerome had been reported missing June 14.

Muma said an initial investigation showed the woman fell about 150 feet down the very steep slope, sustaining substantial injuries. She came to rest in a bushy area that obscured visibility of the body from air or ground searches.

The Jerome Fire Department assisted in recovery as a steep angle rope system was required to safely recover the body from where it was located. Crews brought the body up to the highway to be driven to the Yavapai County Medical Examiner’s Office for an autopsy.

Muma said his department and EMS made contact with Guth on June 13 and decided to check on her the following day. She was discovered to have disappeared, with some strange circumstances, but there were no leads on where she might be.

Wednesday, June 16, a Guardian Air Ambulance helicopter searched some parts of the Jerome area, but found nothing.

Muma said police contacted Guth on June 13 because she had laid down between a retaining wall and a roadway, a considerable distance from her home. Also, authorities had located her dog, which had been loose.

Muma said a resident reported Guth had turned on their water and was watering their plants, without checking with the resident first.

“She refused a ride home, even in as hot as it was,” Muma said. “So we decided to check on her the next day.”

That’s when police found Guth was not at home, but the front door was unlocked, recently bought groceries were not put away. More suspiciously, her truck was out of its driveway, and a set of keys was found on the bumper.

“It appeared as if she were unloading groceries, then left abruptly,” Muma said.

Muma said Guth’s dog was located and was taken to the Jerome Humane Society.

The chief said Guth has not had recent contact with any close friends, and does not have family in the immediate area. Muma believes Guth’s husband passed away about five years ago.

“Some of the acquaintances we talked to, hadn’t spoken with her in some time, or as much as a year,” he said. “They did report her behavior that weekend was odd, and out of character for her.”

Muma said regardless of how the search for Guth ends, one lesson is already clear.

“Check on your neighbors and acquaintances, and see how they’re doing,” he said.