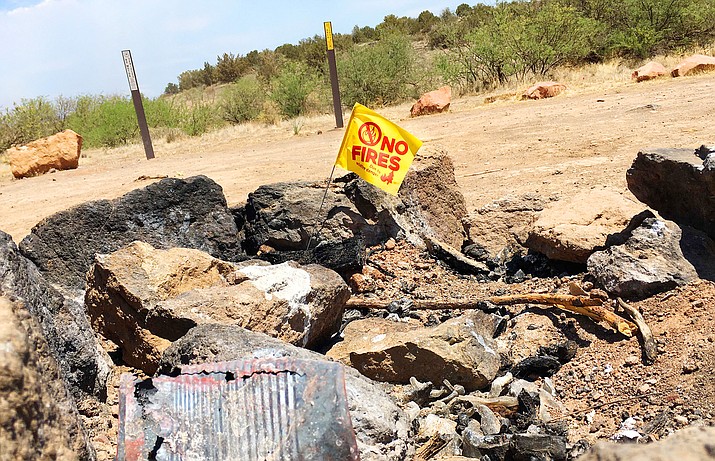 Prescott National Forest staff are preparing for a full closure of the forest that goes into effect Friday, June 25, 8 a.m. The Coconino and Kaibab forests were officially closed to the public as of 8 a.m. Wednesday.

Some Wednesday morning rain slowed the expansion of the Rafael Fire, but it is still at 0% containment. It started about 4 miles east of Perkinsville, east of State Route 89 and Paulden, and has worked its way northeast.

The Rafael Fire is about 36,000 acres big. There are 199 firefighters assigned to it.

The Rafael Fire has advanced into Sycamore Canyon and moved on top to the Mogollon Rim on both the Kaibab National Forest at Sycamore Point and Coconino National Forest near Casner Mountain. 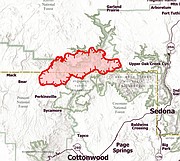 The Rafael Fire straddles both the Yavapai-Coconino county line and is in three different national forests.

In the Prescott National Forest, the southwest corner of the fire has not advanced west or south for the last two days. Wednesday, to the north on the Kaibab and Coconino National Forests, fire crews identified road systems to utilize as fire line to stop the spread north and westward towards identified values at risk.

Type 1 Team 2 assumed management of the fire this morning at 6 a.m. Today, the fire is expected to move north in Sycamore Canyon near Dorsey Spring and east into Red Rock Secret Mountain Wilderness area, where vegetation and topography are in alignment. Firefighters on the north end of the fire will continue with suppression efforts and prepare for future firing operations using road systems and natural features and will utilize aircraft to support these actions.

Here are the evacuation status areas for the blaze, as of 6 a.m. Thursday, according to the U.S. Forest Service:

READY: No areas. However, residents in areas affected by the fire should remain vigilant and be prepared to evacuate. Evacuation notifications are issued when danger is imminent and life-threatening.

GO: In Coconino County, areas around Sycamore Canyon and south of Forest Road 535, off of Forest Road 231. In Yavapai County, some rural ranches in the area of North Forest Road 525 and Bill Gray Road, west of Sedona.

Information about evacuation status can be found on the Facebook pages of Coconino County Emergency Management, the Yavapai County Sheriff’s Office and the national forests.

Sign up for CodeRED alerts and the app at these links:

Know what to do in case of an evacuation by visiting readyforwildfire.org.

The blaze between Camp Verde and the Strawberry/Pine area didn’t grow much Wednesday. Aided by some light to medium midday rain, the fire grew slightly to 41,000 acres by Thursday morning.

There are almost 600 firefighters assigned to the blaze, which has 1% containment.

A meeting was held Wednesday evening at Camp Verde’s England Center to brief the public about the many fronts on which firefighters are battling the fire.

Tuesday afternoon, the Yavapai County Sheriff's Office placed Verde Lakes and Beasley Flats in “ready” status. While there is currently no immediate threat to these areas or the incorporated town of Camp Verde, this is the closest community to the Town of Camp Verde to receive any “ready, set, go” directions since this fire started June 16.

The towns of Strawberry and Pine remain evacuated. State Route 260 remains closed from Blue Heron Lane all the way to where it joins State Route 87 in Payson.

All Tonto, Coconino, and Prescott National Forest lands, roads, and trails in the area of the Backbone Fire are closed.

Near the northeast tip of the Backbone Fire, near Clint’s Well, is the Snake Fire. However, that blaze only covers 71 acres and is 20% contained.

Burning on the west side of State Route 89, near Paulden, this series of five fires is in a very rugged area, covering 802 acres. The lightning-caused blazes were 40% contained with 110 firefighters working on them, as of Thursday morning.

As of 8 a.m. Friday, June 25, the Department of Forestry and Fire Management and the Arizona State Land Department will implement closures to state trust land in all 15 counties of Arizona. These closures, in conjunction with Forest Service closures, will be implemented on state-owned and managed lands.

These lands will be closed to entry for recreational purposes, including hunting, camping, and off-road vehicle use.

What does ‘closing the forest’ mean?

A full forest closure means that the public is prohibited from entering any part of the Prescott National Forest at any time. Those with private inholdings will be allowed access to their property, as well as personnel providing critical utility support and firefighters performing official duties.

Campers and visitors should vacate their campsites before the closure begins, and the public should cancel any plans for visiting the Prescott, Kaibab and Coconino forests for the next several weeks. Though parts of the national forest might receive rain from sporadic storms over the next couple of weeks, this closure will not be rescinded until sufficient precipitation is received.

Forestry staff work on thinning and other forest and watershed restoration projects will cease.

The violation of closures and fire restrictions carries a mandatory appearance in federal court, punishable as a Class B misdemeanor with a fine of up to $5,000 for an individual or $10,000 for an organization, or up to six months in prison, or both.