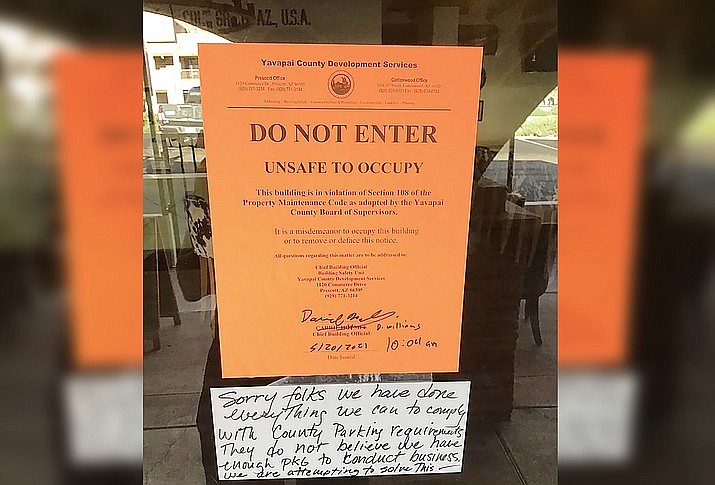 VILLAGE OF OAK CREEK — A popular barbecue restaurant’s recent expansion was brought to a screeching halt in the spring, and has yet to re-open.

An orange “unsafe to occupy” notice, dated May 20, adorned the locked doors of Colt Grill’s newest location, at 6101 N. State Route 179, Suite D, in the Village of Oak Creek.

Williams, reached by phone, said he “cannot comment on any pending investigations.”

Owner Brenda Clouston said the issue the county has with her business is over five parking spaces and she and her team went to work on solutions.

June 21, Clouston said Williams had planned to meet with the owners of the plaza where Colt Grill leases its building. She said an architect has drawn an updated parking plan that reflects the five spaces needed per county zoning ordinances.

“Mr. Williams has the discretion to accept the parking plan, so we’ll see if the county will find a way to ‘yes,’ she said.

Clouston said the restaurant will also still have the parking agreement with the hospitality property close by, giving it 15 spaces for employees.

Clouston has been working on getting the VOC open since August of 2019. There was significant opposition and support for her application that focused heavily on available parking.

A narrow 5-3 approval from the Yavapai County Planning and Zoning was followed by a county Board of Supervisors unanimous final approval.

“According to Development Services’ timeline of events, the owners of Colt Grill were told multiple times they could not open without this Certificate of Occupancy,” Michaels wrote. “The restaurant defied this order and opened to the public regardless. While we may not agree with the law or things like permitting processes, I believe none of us is above the law. We can’t simply disobey laws that inconvenience us or that we don’t like.”

Colt Grill agreed to provide 49 spaces, but ultimately provided only 38 – which flies in the face of the plans submitted to the county and ownership’s assurances that the plans were accurate and they would abide by the 49-space minimum.

She also said none of the county supervisors can simply overrule Development Services.

Clouston, whose chain also is planning a new location in Prescott’s Whiskey Row area, is thinking of expanding even more.

“I hear in Camp Verde, the (town) government has an unofficial motto for dealing with new business,” Clouston said. “Wherever it is prudent, they ask, ‘How can we find a way to yes?’ I am currently investigating opening a Colt Grill in Camp Verde.”

Clouston said she remains hopeful about the future of the small chain.

“I’m hopeful for a good outcome, and grateful to all the people who have written, called and approached me and my team members with their exuberant support and frustration, along with their own stories,” Clouston said.