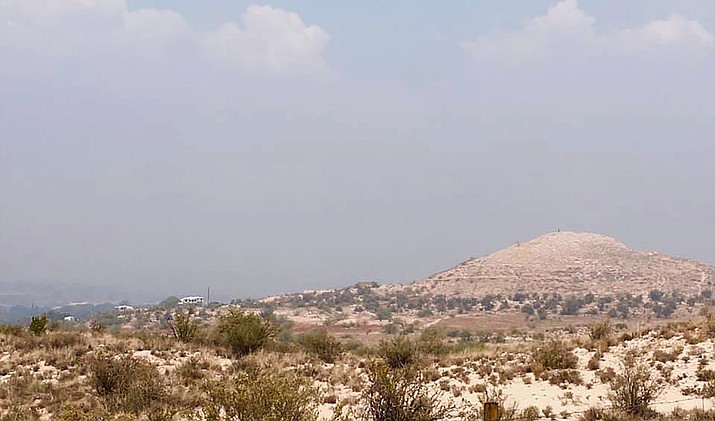 This view, from Rocking Chair Ranch Road off State Route 89A, on the eastern edge of Cottonwood, Saturday morning, shows the smoky nature of the west Verde Valley. Two large wildfires are burning along the edge of the valley. The wind has shifted to blow in from the northeast. VVN/Vyto Starinskas

VERDE VALLEY — Saturday morning, many Verde Valley residents woke to the sight of thick smoke outside, along with the smell.

In some cases, that smell was even noticeable indoors.

Meteorologist Mark Stubblefield of the National Weather Service said some winds are blowing smoke from wildfires — primarily the Rafael Fire — will be blowing out of the north and northeast this weekend.

“While wind direction on the ground might not be headed that same way, what we’re seeing a few hundred feet off the ground might be different (at altitude),” Stubblefield said Saturday morning. “So the western Verde Valley is not going to see much relief until some time Sunday night.”

This chart from the Arizona Department of Environmental Quality shows the spike in unhealthful air that blew through the Verde Valley on Saturday. A National Weather Service meteorologist said winds will likely continue to move smoke to the southwest through Sunday night. Courtesy of ADEQ

Stubblefield said the Weather Service typically launches a balloon at 4 a.m. and 4 p.m. each day that gives them Flagstaff-area conditions. He said even ground conditions at elevated, isolated locations were showing wind blowing smoke into the Verde Valley early Saturday morning.

Residents in the Prescott / Prescott Valley area reported heavy smoke on that side of Mingus Mountain on Saturday as well. Debbie Maneely of Prescott National Forest said aside from the Rock Butte and Rafael blazes, there are no new fires in the area.

Stubblefield said the Sunday-through-Tuesday forecast for the Verde Valley includes a significantly growing chance of rainfall, though not in a traditional monsoon pattern.

The Arizona Department of Environmental Quality’s website, phoenixvis.net/PPMmain.aspx, showed a spike in portable particulates at its Camp Verde station at 9 a.m. The air at that station had been relatively stable in the “good” range, below 38, for nearly 24 hours, spiking to about 155 at 9 a.m.

Coconino County Emergency Management says anyone who can see, taste, or smell smoke should curtail outdoor activity. People with heart disease, lung disease, or asthma should avoid the outdoors entirely, as should children and the elderly.

Conditions have been spiking late most mornings since the Backbone fire began more than a week ago. All national forests in northern Arizona have closed most of the acreage to all visitors.

However, a great deal of the smoke in the west Verde Valley is coming from the Rafael Fire.

The lightning-caused Rafael Fire has been growing across rocky land along the northern edge of the Verde Valley since June 18. It started about 4 miles east of Perkinsville.

As of 6 a.m. Saturday, June 26, the fire had grown to 46,000 acres. It grew in size even though rain fell on many parts of the Verde Valley this week.

There are 553 firefighters assigned to the blaze. Here are the evacuation status levels for the area, according to Coconino and Yavapai counties:

-Most communities south of I-40 and West of I-17 will be downgraded from “set” (Pre-evacuation) to “ready” status. South Garland Prairie remains in “go,” or evacuation status.

The decision to downgrade evacuation status was made with the Type 1 Fire Incident Management Team that is now managing the Rafael Fire. After considering several factors to include fire behavior, fuel types, natural barriers, estimated time of evacuation, and other factors it was determined that this area was no longer currently in imminent danger from the Rafael Fire.

GO: In Yavapai County, some rural ranches in the area of North FSR 525 and Bill Grey Road, West of Sedona (Loy Ranch).

A shelter for evacuees is set up at Sinagua Middle School, 3950 E. Butler in Flagstaff.

The Gila County Sheriff’s Office announced Saturday morning that the town of Pine would be changed from “go” to “set” to allow residents to return to their homes. Forest and fire officials have advised law enforcement the fire no longer poses an imminent threat to buildings in the area.

As of about 10:45 a.m. Saturday, the roadblock at State Route 87 and Houston Mesa Road, in Pine, has been lifted. Highway 87 at mile marker 270, to Strawberry, is still closed, and Strawberry is still on “go” status.

State Route 260 is still closed east of Camp Verde. An incident team leader said Saturday that the fire, at 13 percent containment, has re-opening of State Route 87 as a top priority, followed by 260.

The Backbone fire is at about 40,000 acres. There were almost 700 firefighters assigned to it as of Friday. The Saturday personnel number is 553.