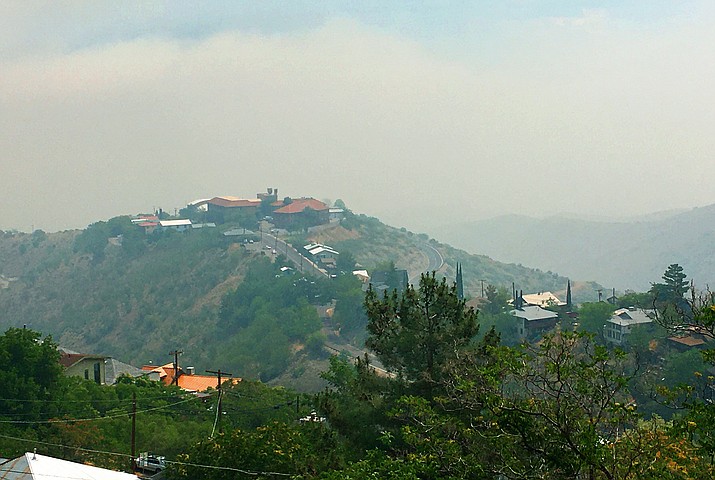 Winds are expected to kick up Sunday afternoon and blow in from the northeast. While the Verde Valley won’t look quite as smoky as it did Saturday morning, air quality is expected to again be unhealthful. Forest officials occur everyone to remain indoors. VVN/Vyto Starinskas

Due largely to backburning, officials announced Sunday the Rafael Fire is officially 62,000 acres. That’s up by about 16,000 acres over the total listed Saturday morning.

However, it also went from zero containment to 11%.

Since winds are going to pick up Sunday and will come into the Verde Valley from the northeast, smoke might still be an issue in much of the area. Saturday morning, light winds blowing in from the north filled much of the valley and the Quad Cities/Prescott area with the smell and sight of thick smoke.

The lightning-caused fire began on June 18 and has been growing across rocky land from its inception point, about 4 miles east of Perkinsville, to the northeast, approaching the northwest corner of the Sedona area. It grew in size even though rain fell on many parts of the Verde Valley this week.

There are 664 firefighters assigned to the blaze.

The Kaibab, Coconino and Prescott national forests have been closed, as have state trust lands.

Operations planned for Sunday include:

-Crews are working in Mooney Canyon, which has very rough terrain.

Here are the evacuation status levels for the area, according to Coconino and Yavapai counties. A shelter for evacuees is set up at Sinagua Middle School, 3950 E. Butler in Flagstaff.

READY: Most communities in Coconino and Yavapai counties west of State Route 89A and south of I-40, including Uptown Sedona and West Sedona.

South Garland Prairie has been change to “set” and has been taken off of evacuation status.

GO: In Yavapai County, some rural ranches in the area of North FSR 525 and Bill Grey Road, West of Sedona (Loy Ranch).

State Route 260 remains closed between Fossil Creek Rd and Highway 87. An incident team leader said Saturday that the fire, at 13 percent containment, has re-opening of State Route 87 as a top priority, followed by 260.

Also Saturday, the Gila County Sheriff’s Office announced Saturday morning that the town of Pine would be changed from “go” to “set” to allow residents to return to their homes. Forest and fire officials have advised law enforcement the fire no longer poses and imminent threat to buildings in the area.

The Backbone fire is at about 41,000 acres and grew by less than 1,000 acres Saturday. It’s 35% contained, mostly along its southwestern perimeter.

There were almost 700 firefighters assigned to the Backbone Fire.