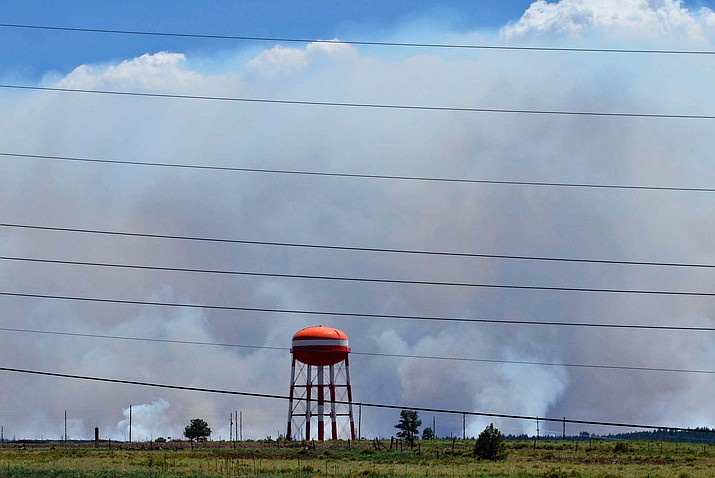 As seen from I-40 on Sunday, the Rafael Fire was still producing a great deal of smoke. However, both the Rafael and Backbone fires were past 40% Monday in containment. VVN/Vyto Starinskas

VERDE VALLEY — Positive news came from the incident command Monday at both of the main wildfires burning near the Verde Valley.

However, none of that news is tied to any kind of immediate improvement in air quality.

The Rafael Fire, burning in a rugged area between Sedona, Kachina Village, I-40 and Williams, continues to emit major smoke that has been pushed in the Verde Valley by winds out of the north or east. However, in a huge leap in the containment listed due to weekend backburning, officials announced Monday the Rafael Fire is 48% contained.

Meanwhile, the Backbone Fire, burning southeast of Camp Verde and west of Strawberry and Pine, is up slightly to 43% containment.

With only a 1% chance of rain in the area and 10-mph winds out of the east forecast for Monday, but slightly cooler temperatures, smoke will linger, but crews should be able to continue to contain the fire.

There are about 630 firefighters assigned to the blaze.

Monday, on the north side of the fire, crews will be heavily engaged in securing the fire by patrol and mop-up activities. This compliments Sunday evening’s operation in burning out areas that would have given the main fire a path toward the town of Williams.

All perimeter firing operations are substantially complete, but smoke from burning interior fuels will continue for a few days. Monday, smoke is expected in the Verde Valley into Prescott and as winds shift later in the day into the Williams area.

The lightning-caused fire began on June 18 and has been growing across rocky land from its inception point, about 4 miles east of Perkinsville, to the northeast, approaching the northwest corner of the Sedona area. It grew in size even though rain fell on many parts of the Verde Valley last week.

Here are the evacuation status levels for the area, according to Coconino and Yavapai counties. A shelter for evacuees is set up at Sinagua Middle School, 3950 E. Butler in Flagstaff.

GO: In Coconino County, Sycamore Canyon, and in Yavapai County, Loy Ranch. These areas were evacuated several days ago.

Information about evacuation status can be found on the social media pages of Coconino County, the Yavapai County Sheriff’s Office and the Kaibab, Coconino and Prescott national forests.

State Route 260 remains closed between Fossil Creek Rd and Highway 87. An incident team leader said Saturday that the fire crews have re-opening of State Route 87 as a top priority, followed by 260.

The fire is holding steady at 41,000 acres. There are 632 firefighters on the Backbone Fire.

Saturday, the Gila County Sheriff’s Office, after consulting with fire and forest teams, lifted the “go” order for Pine and allowed residents to return to their homes.

Heavy smoke may settle into canyon bottoms and low elevation communities in the Verde Valley over the next few nights.

Terri Farneti of Yavapai County Community Health Services, in a news release, said the Arizona Department of EQ is forecasting smoke to disperse toward the southwest, with light to moderate smoke impacts possible in Paulden, Chino Valley, and Prescott. There is a chance for brief heavy impacts in these areas, especially if cloud cover moves over, allowing smoke to drop closer to the ground.

Overnight, smoke is forecast to drain into the Verde Valley once again, as well as continue moving toward the west-southwest.

However, smoke can deviate from this typical pattern depending on weather conditions.

If you can see less than five miles, the air quality is unhealthy for young children, adults over age 65, pregnant women, and people with heart and/or lung disease, asthma, or other respiratory illness; they should minimize outdoor activity.

These people should reschedule outdoor recreational activities to a day with better air quality.

It is OK for adults in good health to be out and about, but they should periodically check visibility and reduce strenuous outside activities, especially when fires are nearby.