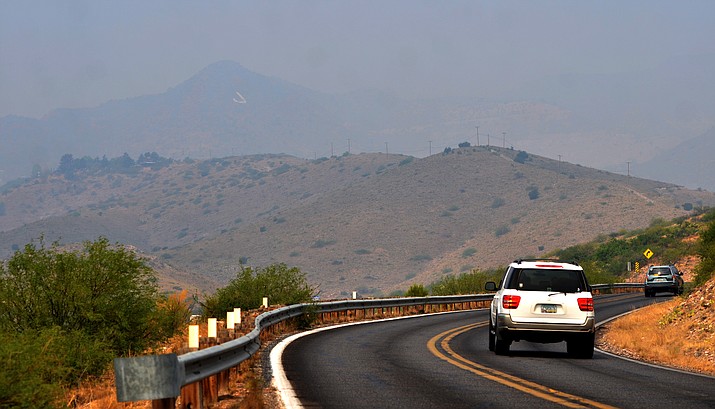 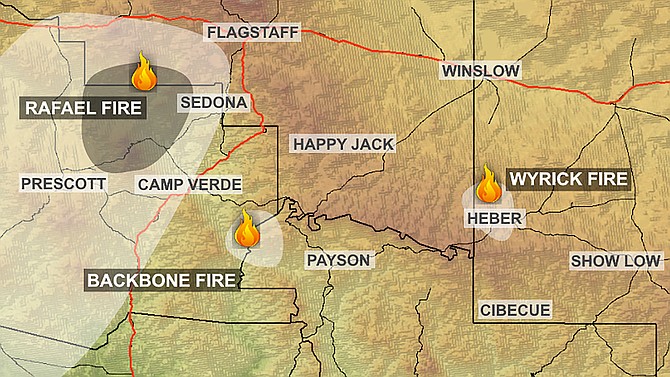 As of Tuesday morning, the light areas on this map show some of the areas that will be affected the most by fire smoke over the next few days. Courtesy of Arizona Department of Environmental Quality

VERDE VALLEY — While the Arizona Department of Environmental Quality points out that the Rafael and Backbone fires are well beyond 55% containment, smoke could continue to linger in the Verde Valley even if monsoon weather patterns start to bring in significant rain.

Tuesday morning, Prescott National Forest announced the Rafael Fire is at 59% containment. There are almost 600 firefighters assigned to the blaze, which was mapped Monday at about 78,000 acres.

The lightning-caused fire began on June 18 and has been growing across rocky land from its inception point, about 4 miles east of Perkinsville, to the northeast, approaching the northwest corner of the Sedona area. It grew in size even though rain fell on many parts of the Verde Valley last week.

In perhaps the most promising development Monday, the Yavapai County Sheriff’s announced that areas off Forest Road 525 and Bill Gray Road and residents of the Loy Ranch area who were in a “Go” status may return to their ranches and are now in a “Set” status.

Residents of the areas off Bill Gray Road and off of select parts of Forest roads 525, 525C, 152C and Bear Mountain Road have had their readiness levels reduced to “Ready” status.

Here are the evacuation status levels for the area, according to Coconino and Yavapai counties.

Information about evacuation status can be found on the social media pages of Coconino County, the Yavapai County Sheriff’s Office and the Kaibab, Coconino and Prescott national forests.

State Route 260 remains closed between Fossil Creek Rd and Highway 87. An incident team leader said Saturday that the fire crews have re-opening of State Route 87 as a top priority, followed by 260.

Tuesday morning, the fire is holding steady at 41,000 acres and is 64% contained. There are 500 firefighters on the Backbone Fire, but an incident commander said that number could diminish as teams are assigned to more pressing concerns.

Saturday, the Gila County Sheriff’s Office, after consulting with fire and forest teams, lifted the “go” order for Pine and allowed residents to return to their homes.

Heavy smoke may settle into canyon bottoms and low elevation communities in the Verde Valley over the next few nights.

Terri Farneti of Yavapai County Community Health Services said the Arizona Department of EQ is forecasting smoke to disperse toward the southwest, with light to moderate smoke impacts possible in Paulden, Chino Valley, and Prescott. There is a chance for brief heavy impacts in these areas, especially if cloud cover moves over, allowing smoke to drop closer to the ground.

Monday night, some smoke drained into the Verde Valley once again, as well as continue moving toward the west-southwest, but not to the high degree forecasts showed as possible.

The Rafael and Backbone fires are within the plume shown on the ADEQ map. However, the 7,000-acre Wyrick Fire, near Heber and Show Low, which was part of the plume last week, no longer appears to be sending smoke to the Verde Valley.

Tuesday morning, ADEQ released a map that shows a plume of smoke is shifting. The areas most affected will be the western Verde Valley, Williams and the Quad Cities (Prescott).

Early mornings are usually the worst time for wildfire smoke, Farneti said. As temperatures warm during the day, there are stronger winds which disperses smoke. As temperatures cool at night, winds generally calm down and smoke settles to the ground, flowing from higher elevations to lower elevations, much like a water.

However, smoke can deviate from this typical pattern depending on weather conditions.

If you can see less than five miles, the air quality is unhealthy for young children, adults over age 65, pregnant women, and people with heart and/or lung disease, asthma, or other respiratory illness; they should minimize outdoor activity.

These people should reschedule outdoor recreational activities to a day with better air quality.

It is OK for adults in good health to be out and about, but they should periodically check visibility and reduce strenuous outside activities, especially when fires are nearby.

A forecast for Camp Verde — typically the warmest spot in the Verde Valley — showed afternoon thunderstorms forming late Tuesday morning, with a high temperature of 92 degrees. There is a 50% chance of rain Wednesday, at 91 degrees, going up to 95 on Thursday, when the chance of rain drops to 21%.

An Accuweather.com meteorologist says enhanced shower and thunderstorm activity across the southwest is expected this week as moisture is drawn into the region from the Gulf of Mexico and Gulf of California.