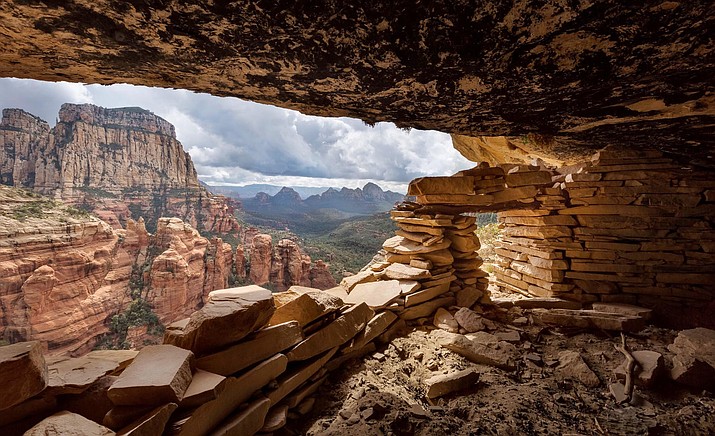 Join author and photographer Larry Lindahl on Sunday, March 7 or Thursday, March 11 at 1 p.m. at the Mary D. Fisher Theatre in Sedona. Come enjoy “Exploring the Ancient Southwest” — a presentation of photos filled with the power and grace of ancient stone dwellings, rock art, and stunning cliff-top scenery.

This program is presented by the Verde Valley Chapter of the Arizona Archaeological Society. Tickets are $10 to benefit the VVCAAS.

Lindahl will share his personal collection of images of the fascinating culture that flourished in the Southwest from roughly 650-1200AD.

Remnants of their story are scattered in pieces of pottery, rare cultivated agave, centuries-old corn cobs, and structures precariously perched in the alcoves of the sandstone cliffs.

His entertaining stories cover his techniques to capture the beauty of their existence. Presentation is an hour and a half. His books will be for sale afterwards including award-winning “Secret Sedona” and “The Ancient Southwest.”

Larry Lindahl grew up in the Pacific Northwest backpacking, teaching skiing, and at 18 he summited Mount Rainier. His interest in photography began early winning a photography contest in high school.

He learned more of the craft when he hired photographers in his career as the ABC television network Los Angeles print advertising art director.

Seeking a life that would enrich his soul, and afford him more time in the outdoors, he left California and moved to Arizona, landing in Sedona in 1993. Working with medium-format film cameras his photography was soon published in magazines, books, and calendars including photo portfolios in Arizona Highways magazine.

With five photography books to his credit, he now shares his experience and knowledge through teaching. He leads multi-day photo workshops throughout the Southwest, and single-day workshops in Sedona. Visit LarryLindahl.com for more information.

“Larry Lindahl: Exploring the Ancient Southwest” will be presented at the Mary D. Fisher Theatre on Sunday, March 7 at 1 p.m. and Thursday, March 11 at 1 p.m.

Tickets are $10 to benefit the VVCAAS. For tickets and more information, please call 928-282-1177. Both the theatre and film festival office are located at 2030 W. Hwy. 89A, in West Sedona. For more information, visit: SedonaFilmFestival.org.