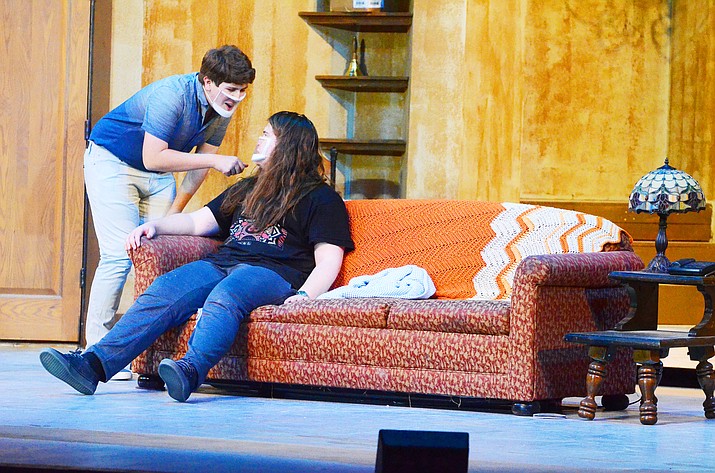 Imagine a con artist who for years has benefited from a loophole in the welfare system.

It gets funnier when the man who has scammed tens of thousands of tax-free dollars from the government is forced to prove his many fictitious borders are actually real.

Written by Michael Cooney, ‘Cash on Delivery’ is a hilarious comedy full of mistaken identities, slamming doors – and a con that spirals out of control.

Because of the COVID-19 pandemic, it’s also the first theater production this school year by Mingus Union’s A Troupe Of Ridiculous Thespians – better known as A.T.O.R.T.

“Not being able to be as involved in the theater activities we normally do is hard,” said Tyler Teague, who plays Dr. Chapman. “It has made us lose motivation. This is an activity we all love, so as hard as it is not being able to have the same connections with the show.”

Choir and drama teacher James Ball said that A.T.O.R.T. “is excited to be coming out of quarantine” to present ‘Cash on Delivery,’ a fast-moving hysterical comedic play that “will have you laughing the whole time.”

“While these is no official rating attached to the play, I would rate it as more of a PG-13 than a PG,” Ball said. “It is a British farce, so there are lot of ‘bloody hells’ and some jokes that may not be suitable for younger children. However, there are no promiscuities or swearing in the show (other than the bloody hells already mentioned). The plot is fast moving and may not capture the younger audience’s attention. Also, it does teach about how to pull off tax evasion ... so you might not want the younger generation to learn about that.”

Ball said that his talented cast has worked on this production since October – but was delayed two weeks for a COVID-19 quarantine. After three weeks of rehearsal, Mingus Union began a two-month shutdown where students were exclusively in class via online/distance learning.

“I am so glad that this show has persevered through all the trials of restrictions and shut downs,” Ball said. “I have wanted to do this show for years after seeing it at the State Theatre conference and am so happy it opens so soon.

During the school’s shutdown, the theater troupe rehearsed via Zoom, and focused on character work and memorization.

“We also did blocking for Act Two through a series of dots on a slide show,” Ball said. “This continued from November through January. On Feb. 1 we met back in person and starting re-working the show. Fortunately after a couple months the students had their lines down just fine.”

Elias Beery, who plays Norman McDonald in ‘Cash on Delivery,’ said that although rehearsing on Zoom wasn’t traditional theater, it helped he and his fellow theater students get through the pandemic.

“Although we would have all preferred in person rehearsals, I feel something is always better than nothing,” Beery said. “With the pandemic talking everything away from us and changing everything, it was nice to have theater as a static thing to fall back on.”

Jasmine Fang, who plays Ms. Forbright, said rehearsing via Zoom gave the troupe “a lot of time to focus on how we should portray our character.”

“This was challenging but good in some ways,” she said. “It was good to be able to have the time to do that.”

Mingus Union will offer three ways to watch this hysterical production, scheduled for weekends, March 5 through March 14. The school is allowed to offer a limited in-person audience for each performance in the school’s auditorium. Mingus Union High School is at 1801 E. Fir St., Cottonwood.

Tickets are available beginning Feb. 25 online at atort.ludus.com or at the Mingus bookstore from 7 a.m. until 3 p.m. Patrons may call the box office at 928-649-4466 for any tickets, questions, comments, or concerns.

No tickets will be sold at the door.

Cost is $10 for adults and seniors, $8 for students. Live stream or On-Demand tickets, recommended price is $10, however pay what you can, Ball said.

For people who attend the performance at Mingus Union’s theater, the following is the school’s in-person mitigation information:

• All patrons must sign a COVID-19 waiver upon entry;

• All patrons must wear a mask (performers will be as well);

• Six feet distance between parties will be enforced;

• Hand sanitizer will be available throughout the auditorium;

• No concessions will be offered.

“I know some people are itching to see a live performance, and we hope to accomplish that following all the strategies put forth by the county,” Ball said. “If people are not comfortable coming in person, we hope they enjoy the professional broadcast we have arranged.”

‘Cash on Delivery’ is directed by James Ball and assistant director Breinne Reeder. Technical production and set design was created by Jeff Neugebauer and sound design by Stephen Renard. Lydia Collins is the program’s costume designer.

“We hope you can come in, watch live, or watch on-demand our brilliant show,” Ball said. “It has been far too long since we have had live theatre and we are so excited to be bringing this production to our community.”

“It’s great that those things we associate with being in-person can continue, such as athletics, and that some of the items missing of late, such as theatre, can return,” Westcott said.

Tatum Mahon, who plays Linda Swan, said that she is “very proud of our cast and crew for working hard and persevering.”