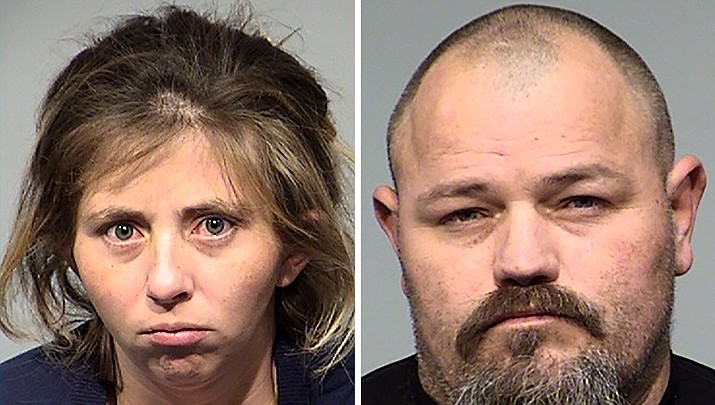 CORNVILLE — A woman and a man were booked into the Yavapai County Detention Center Monday night on multiple felony charges after an incident in the Lower Oak Creek Estates part of Cornville, according to a news release.

Michael May, 41, and Crystal L. Cox, 27, both of Cornville, were both charged with possession of a dangerous drug (methamphetamine), possession of drug paraphernalia, two counts of child abuse per domestic violence, two counts of endangerment per domestic violence and weapons misconduct, according to the release from the Yavapai County Sheriff’s Office.

Sheriff’s deputies were called to a home in the 2700 block of South Kadomoto Drive at a 6 p.m. They were called in to assist the Department of Child Safety with a court order to remove two minor children, ages 11 and 3, from the home, the release states.

Deputies contacted May and Cox. The 11-year-old was found on a bed near a methamphetamine “bong.” Animal feces was visible throughout the home, the Sherriff’s Office said.

Based on the presence of drugs, a search warrant was obtained and served by detectives from Partners Against Narcotics Trafficking. Detectives found a usable amount of methamphetamine on the headboard of the bed, numerous glass pipes with methamphetamine residue, and a digital scale with meth residue in the same bedroom where the 11-year-old was found, the release states.

Also in that room, detectives located a large machete and hunting knife, the Sherriff’s Office said.

Both Cox and May are prohibited possessors due to prior felony convictions, according to the release.

May made his $2,500 bond Tuesday and is out of jail. Cox remained at the Detention Center, as of Wednesday morning, on a $2,500 paper bond.