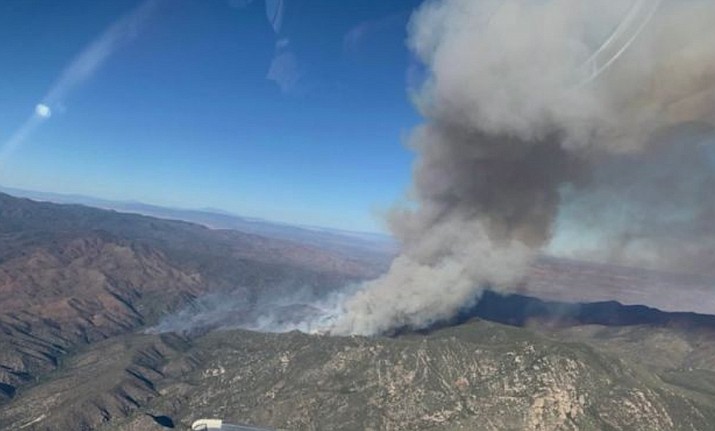 Besides the Horse Fire in Crown King that burned nearly 9,537 acres in October 2020, Yavapai County, in particular, was very fortunate compared to the rest of state in that it didn’t experience any life-threatening fires. Prescott National Forest photo

As we come off one of Arizona’s worst fire seasons in over a decade, the National Weather Service in Flagstaff announced that it doesn’t seem 2021 will yield better results as well-below-average precipitation levels in February have allowed severe-to-exceptional drought conditions to continue across Northern Arizona.

Besides the Horse Fire in Crown King that burned nearly 9,537 acres in October 2020, Yavapai County, in particular, was very fortunate compared to the rest of state in that it didn’t experience any life-threatening fires, at least according to Central Arizona Fire and Medical Authority Fire Chief Scott Freitag.

However, it seems drought conditions this year are still very much expected in Yavapai County, potentially making way for harmful fires in the area. In NWS’s announcement, they listed a timeline of the temperature and precipitation outlooks that are to be expected this year, which is as follows:

• March: Odds favor drier than average conditions across Arizona. Equal chances exist for above, near, or below normal temperatures. There could be a few episodes of high winds, unsettled weather, and high-elevation snowfall.

• March through May: The current outlook for spring indicates that odds are tilted in favor of warmer and drier than average conditions. However, there still could be a few episodes of high winds, unsettled weather, and high-elevation snowfall.

• June through August: The extended outlook favors above normal temperatures, and equal chances of above, near, and below normal precipitation across Arizona.

The NWS also stated that with drier and warmer-than-normal weather favored this spring, fire potential during the early part of this season will trend toward above normal fire threats as this area enters the traditional fire season.

“The chaparral vegetation and plants are really showing stress on them. The leaves are changing which they really shouldn’t be this time of year,” Yowell said. “You take the stress of the vegetation with the amount of grass that we have still from the wet spring from last year, once things heat, the grass is going to be the carrier but all the species that are stressed are going to be ready and available to burn as well.”

He added that these drought conditions have also impacted areas in the forest where the ponderosa pines being targeted by the ips beetle (bark beetles), which ultimately makes them more susceptible to fires.

“With that forecast of more drought, that definitely gives us concern because there is possibly not going to be any spring-time relief,” Yowell said. “If we don’t get some moisture here soon, we’re probably not going to see a spring green up.”

However, Yowell also said the Prescott NF does try to take advantage of the opportunities to conduct prescribed burns to lessen the damage from any wildfires.

Aaron Valdez is a reporter for Prescott News Network.